What comes to mind when you think of camping weather?  Sunny days?  Starry nights? Blizzards, gale force winds and pounding rains?  Maybe it is just me, but that last group is what I think of.  It probably started out of necessity because  it seems that most every trip coincides with some major meteorological event.  My early camping memories are of the sound of fat raindrops on canvas tents.  The smell of wet canvas still comes easily to mind despite the many years because it filled those tents both small and large long after they had dried.

My tents have gotten a lot less smelly and a lot less leaky over the years not to mention a lot lighter.  My clothing and sleep system have also come a long way from my first Smokey Bear sleeping bag and the days of blue jeans and t-shirts.   As my gear and methods have improved weather has gone from being something to avoid to something to get out into.  If I know 8 inches of rain are going to fall I’m going to stay home rather than risk my life in a flood, but I’m not about to let the average storm keep me off the trail and sometimes I make a point of getting out into the more exciting forms of weather.

Weather has to be respected of course.  You may have noticed one of the few links to the right leads to the .gov weather site.  Their tools allow you to get spot forecasts based on specific GPS coordinates which take elevation into account.  Elevation changes weather a lot at times so going by the local airport forecast may be very misleading if you are headed to a mountain top.

I have many of my favorite spots bookmarked so I can easily get an idea of what to expect if I head out.  Of course just because the forecast says something before you leave doesn’t mean that is what will happen.  If you are heading into the back country it only makes sense to come prepared for a wide range of weather surprises.  It also helps if you can learn to read weather patterns so what happens next is less of a surprise even if the forecast is wrong.

There’s just something both exhilarating and comfortably relaxing about being out there in foul weather and knowing that you are just fine.  The sound of rain or snow on a tent is magical as far as I’m concerned.  While a flapping tent can be annoying the majestic roar of a big piece of air moving past or just near by, even if it jolts you awake, is an exhibition of nature to be savored.  Yes a perfect sunset is perfect and a starry night is one of the best reasons to drag your butt up a mountain, but I think so long as I don’t take a whiner along with me, foul weather is just fine by me.

Living what I preach I headed out the other night into a minor blizzard.  Setting up camp in gale force winds after stomping through close to a foot of fresh snow was interesting to be sure.  I got lucky on my wind direction guess and though the lee side was flapping like a loose sail I didn’t have any drifting from under the fly.  Not bad for a three season tent set up in the middle of a storm without using a lantern. 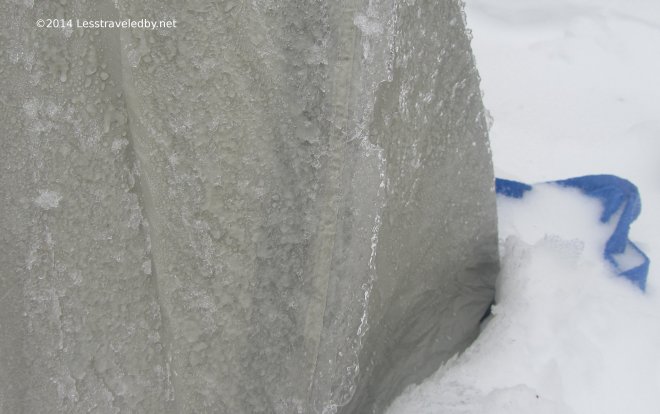 The snow turned to sleet about the time I got the tent up and a couple of hours later turned to freezing rain for a while.  My old TNF bomber rides out pretty much any weather but using my hiking poles to set up deadmen and setting up stern to the wind with some snow prepacked on that side seemed like a good idea.  There was some tremendous roaring going on out there but things were pretty calm inside. 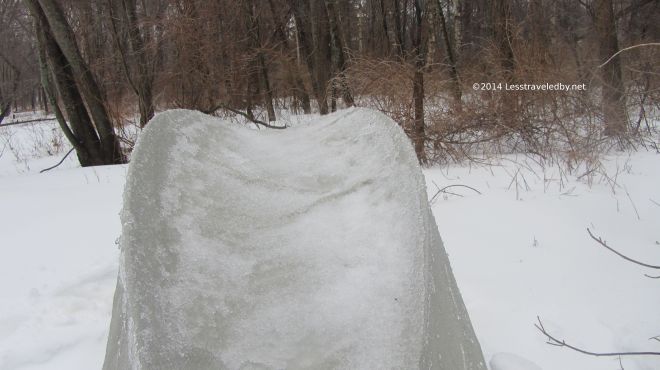 There wasn’t a lot of ice build up in the morning but enough to make me glad I was only out for one night.  I set up the stove outside the front door and had my cocoacino before I got out of bed.  My footprints from the night before were hard to follow in spots and completely gone in others.

Now they say another potential big storm is coming tonight.  I think my gear is dried out but I’m not sure if my legs have recovered from postholing through the deep snow.  Oh well, nobody said it would be easy, but there is plenty of  adventure to be found on the path less traveled by