There is that moment, maybe just before you fall asleep, maybe just after.   All is peaceful with your body and mind at rest.  Then…SNAP!  Somewhere in the dark something has broken a branch, or was that a whole tree‽  In an instant you go from peaceful rest to full adrenaline rush.  Eyes trying to see in the dark, ears straining to hear something other than your pounding heart.  Slowly you get your self under control and then just as you are about to fall asleep again…SNAP!

We’ve all been there, but this came to mind today after reading Racoon Travel’s post today asking how folks deal with being alone in the woods at night.  It got me to thinking about how I’ve changed over the years in my feelings about the noises in the night or just being alone in the woods for that matter.   As social and communal animals just the act of going into the wilds alone can be unsettling.  With no conversation to distract us from it we become acutely aware of how alone we are and how small we are in the face of nature.

Growing up on a farm I was used to being outdoors alone from an early age.  Whether working in a distant field or tramping through the woods there was never any concern.  I think the first time I recall feeling any sense of fear in regards to nature was on a trip to the Tetons in the early 80s.   Day hiking alone on a trail through very thick forest I came upon some monster sized bear tracks.  These were not the black bear sized paws I was familiar with.  There was no doubt that a pretty good sized grizzly had made these prints.  My resolve lasted only a few minutes more as I followed them in the same direction I was headed then I turned back and at a pretty good pace as I recall heh.

In the years since I have done a lot of solo camping, first on my motorcycle and now on foot.  While going alone into the wilderness brings challenges, facing those challenges can bring great rewards I’ve found.  Looking back now I can see how things have changed and how some of them have stayed the same.  I may not turn around as easily, but fear is an instinctive emotion that travels quicker than logical thought so often arrives first heh.

Back in the 90s I used to visit Mt Palomar near San Diego on a frequent basis.  Camping there I had one of the most disturbing and hilarious brushes with nature.  I was in my tent laying down for a late afternoon nap.  Staying up late to watch the stars was a favorite activity on Palomar so naps were not uncommon the next day.  As I lay there I began to hear something approaching through the underbrush.  Slow stealthy steps to be sure, but the sound was unmistakable.  As the sounds grew louder and louder my heart began to race.   Peeking out from my tent to see if I could spot this great beast I noticed movement.  There, just outside my tent, was a half inch long beetle scuttling through the dry grass and leaves.  His tiny legs just inches from my head were making the sound that had me so scared.

Spending more and more time alone out there I have fewer and fewer of these moments.  Even the noises in the night don’t have the same effect.  Sure that initial adrenaline shot will get my heart pounding for a minute, but now I’m just as apt to roll over and go back to sleep as I am to stay up wondering what that was I heard.  Maybe I’m just getting old, but I seem to be more at peace with nature than in fear of it.  I have plenty of respect of course, but see myself as working with it rather than fighting it.

Last Fall on my aborted Grafton Loop trip I hiked in a cold rain all day then set up camp below Sunday River Whitecap.  Filtering water and eating a rushed dinner got me out of my wet clothes and into my tent as the temps began to dip into the 30s.  Dark came early and the night was going to be long so I started napping pretty fast.  Then in the darkness there came a snort.  That is a noise generally reserved for your larger animals.  Chipmunks don’t snort and neither do sparrows.  No, a snort usually comes from something pretty good sized and this one sounded pretty close.

The sound came again and as logic had caught up with instinct I burst out laughing.  All I could think of was that one of nature’s majestic beasts, be it a bear, deer or moose, had just gotten a snoot full of my wet socks and was likely snorting in horror.   Still chuckling to myself I heard a few more snorts but was soon asleep again.  That trip had to be cut short due to weather and logistics but definitely not due to snorts in the dark.

Maybe I’m just getting old but those moments of sheer terror don’t come as often.  I’m ok with less terror, not so much with the getting old, but I do enjoy going farther out there alone than ever before.  The challenges to be faced and the rigors to be endured are well worth the effort to be able to soak in the sights, smells and even the snorts on the path less traveled by 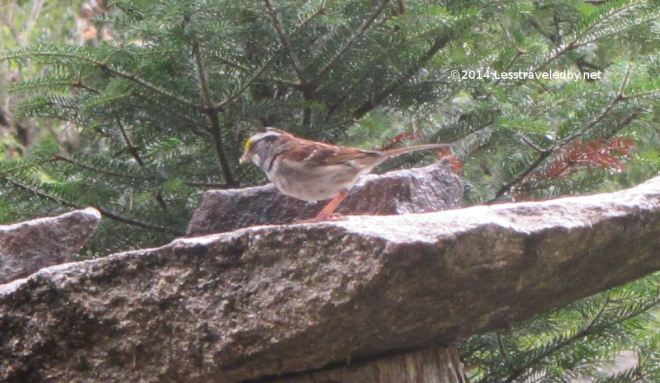 One thought on “What Was That‽”