I took this trip back in January before the snow finally started falling. The Lincoln Woods parking lot was a solid slab of ice from the mid-winter thaw a few weeks prior. I put on my trail crampons before I pulled my pack out of the car. The Eastside Trail was bad until the washout and then much worse after that. 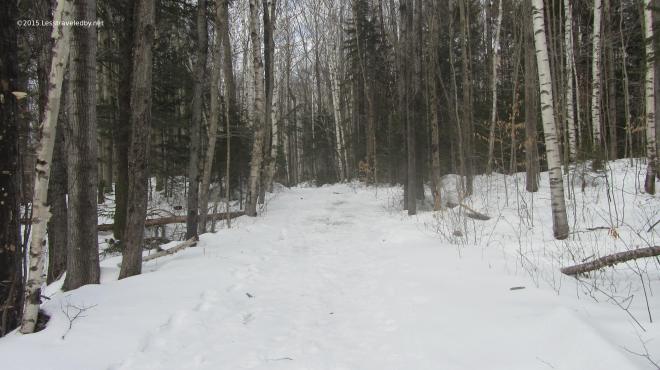 The whole trail was covered in frozen footprints and I was really glad I’d brought the spikes in addition to the snowshoes.

The river was littered with giant slabs of ice on both sides. The thaw and rain had produced a huge flow that literally exploded the thick ice cover from the river.

The slabs were 8-10 inches, varying in size from dinner plate to dinner table. Most were pretty big making an impressive sound when thumped. The big ice pieces also made some interesting noises floating down the river bouncing off of rocks and the encroaching ice cover. I’ll bet they were making some really interesting noises when the thaw hit and the river exploded!

Just after I set up camp the sun popped out for a little bit. Temps were in the low teens but the wind wasn’t doing much so it didn’t seem too cold. 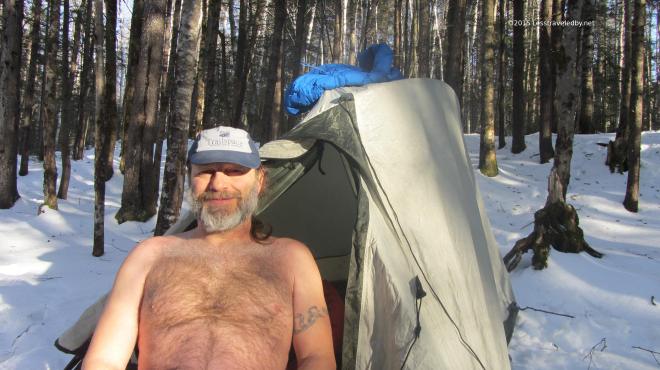 Once I finished setting up camp it was time to get rid of a sweaty base layer to get ready for hanging out in the cold. Winter camping is all about maintaining your body temp because it is hard to catch up once you get behind. Taking a minute to swap out my base and let my fur air dry for a minute would keep me warmer in the long run. 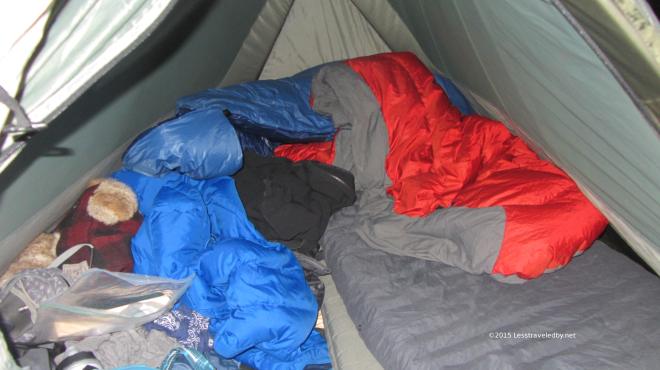 I use a two man tent for winter solo trips to give me plenty of room for gear. This is an old TNF Tephra 22. They still make a tent with that name but it is very different. Mine is really a three season tent, but I’ve figured out how to use it in the snow pretty well over the last few years.

Once I got all settled in and warmed up I pulled out a book I’d brought to pass some time and realized I’d left my glasses in my pack outside heh. I’ve only worn glasses a year or so now and still forget I need them though that chilly trip to fetch them should help me remember next time.

This is how I dressed when I got up the next morning as my fur was no match for the low single digit temps. Puttering around camp a person doesn’t generate a lot of heat so it is important to hang on to what you’ve got.

These water bottles spent the night inside the tent with me tucked inside gloves in hopes of not freezing solid. The one with warm water was pretty slushy by morning and the other was almost frozen solid.

One thing I did to generate some heat that morning was to cut up some firewood. I figured that afternoon I’d build a fire. I don’t usually bring a saw but this time of year it is nice to be able to burn bigger pieces of wood that last a bit longer.

Finally there was a reason to get the snowshoes out! I headed off into the wilderness towards Cedar Brook. There was a ski trail broken out which I tried to avoid as I broke out a snowshoe trail next to it.

The ice was trying to reform on the river below. It made for some interesting views and the sound of water took some of the edge off my crunching through the snow.

Looking at these pictures makes me shiver now, but at the time I was warm.  Something about breaking trail even in shallow snow will do that. 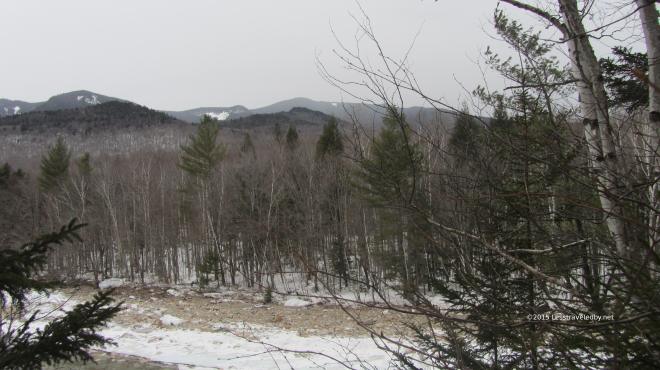 I was expecting snow that evening and by noon I could see and feel the storm coming. The wind picked up a bit and there was more of a bite to the air. I needed to make some more water anyway so I figured it was a good time to make some cocoa while I had the stove out.

Up til this point I’d gotten away with using my canister stove by keeping the fuel can in my jacket for a while before use. A snowshoe made a good base for keeping the can out of the snow. This time though I think it was too cold for the O rings as I couldn’t get the stove to seal to any of the canisters I had with me.

I considered lighting a fire, but the thought of my pretty GSI kettle charring over a wood fire made me sad. So since I had daylight to get out I packed everything up and hit the trail. With all the new winter gear I’ve acquired my ability to survive the cold had surpassed my stove which I found oddly satisfying.

Now armed with a truly winter capable stove I’m hoping to head back in the near future. The Whites have seen a lot of snow in the last few weeks so I’ll have to really dig if I want to find that pile of firewood I left behind. On the other hand the temps have been dropping even lower so even if I can’t find the wood pile the digging will be good for keeping me warm 🙂