It may be a late Summer swelter out there for most of us, but that doesn’t mean I can’t start testing out my new Winter tent. A great deal on an Easton Torrent 2P came up a few months ago, but so far I’d only set it up in the living room. I bought it for snow camping as it has full double walls and extra structural supports to carry a snow load, but they claim it ventilates well enough to be used all year. 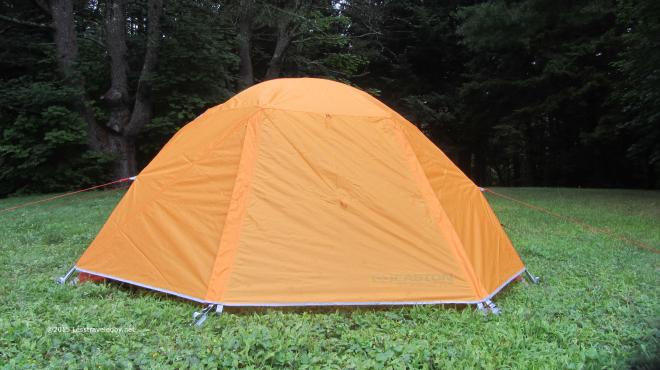 We have great weather to test that out today with high humidity and light, intermittent showers. Hoping for some heavier stuff later to test out the seam sealing.

This vestibule design with two stakes holding the side panels in place makes for a lot of options in using the door. I can imagine rolling it all the way up and peering out through that at the winter stars while snuggled in my quilts. For now I have the bottom open to pull air in with all inner and outer vents opened up top.  I’ll sleep out there tonight to test how well that chimney effect works.

Started catching up reporting on previous adventures, I have my eye on the weather for a possible trip next week plus the coming Fall season to plan for, but that doesn’t mean I can’t get a little excited about snow camping. Going to be a while before I can try this tent out in those conditions though so don’t expect a full review any time soon.

Hope you are getting out there when you can. I know I’m ready, but I’m pretty sure I’ll be carrying something lighter than this tent next week 🙂