24 pics from a quick training trip over and back one of  my favorite mountains in Maine, East Baldpate

Unloading in the Grafton Notch State Park lot I was excited to be getting back out on trail. Early August was devoted to family stuff but now I was ready to spend some time going up and down some mountains to see how strong the legs really were. At this point I was just a few weeks from starting the Long Trail with bags and boxes of food piling up at home. It seemed a good idea to make sure to spend some time keeping the legs warmed up too.

This good sized snake had apparently hitched a ride all the way up there inside my rolled up motorcycle cover. Near as I can tell he must have gotten in there at some point in the garage trying to peel off that old skin and ended up bungee corded to the back of my scoot for a ride across the state of Maine.

He headed off into the woods to the south while I crossed the highway towards the woods on the other side. The well marked and groomed trail head usually makes me giggle a bit. It seems like a baited trap if you know what follows.

On a warm August day the shadows of the forest were welcome, though they do hold back any sort of breeze. The first part of the trail climbs a bit, then rolls for a while before reaching the Baldpate shelter.

I had never taken the time to visit the shelter before despite hiking past the sign for it many times. I stopped in to eat lunch and do some exploring since I wasn’t in any hurry on this trip. The metal roof was noisy, but it seemed a nice enough spot. The stream behind the shelter was running nicely thanks to some recent rain.

Then it was time to start the actual climb of West Baldpate. Right past the shelter turn off the trail starts a series of stony ascents.

Thanks to the efforts of some dedicated trail workers these stones have been organized in many places to create a staircase affect.

Perfect trail for testing out the legs. This sort of climbing requires high knee lifting and taking on challenging foot placements without losing stride. Thankfully I’ve done this climb enough to know how short it is because on a hot day it is definitely one to get on top of and put behind you.

Breaking out of the trees near the summit meant losing the shadows but gaining a nice breeze.

Also some nice views of the mountains ahead for those staying on the AT. Pretty sure I could see at least as far as the section I’d done back in June. A view like that makes a person want to just keep walking to reach that horizon. 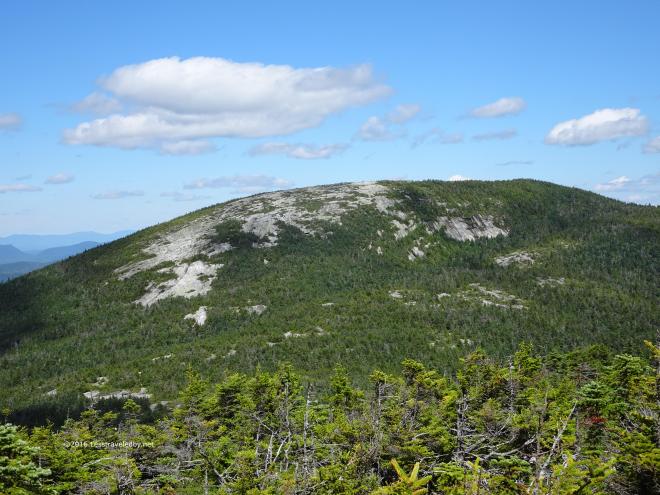 One step at a time though, so first it would be time to traverse the shallow col and head up the exposed side of East Baldpate. Again having done this route before I know how much fun that will be rather than being concerned about how big it looks. The first time I stood here I was a bit nervous about it, but the slabs make an easy ramp compared to the rock pile trails I’m used to.

The col is a neat alpine bog and thankfully most folks are pretty good about sticking to the trail. The rock bowl here traps water keeping the ground wet even in a dry year such as this one. I always get a kick out of passing through alpine bogs just because it seems strange to have wetlands on top of a mountain. 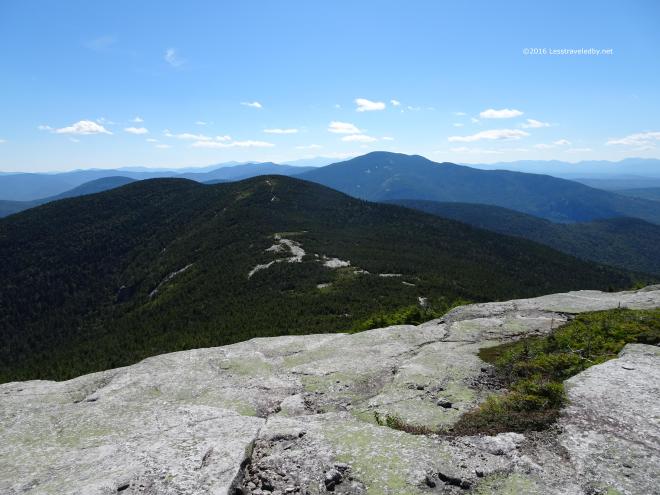 Soon enough it was time for second lunch on top of the slabs. The actual summit is a bit farther down the trail, but the big open ledge at the top is a great spot to take in the views to the west and south. Here you can see the west peak where I stood earlier with Old Speck rising up behind. 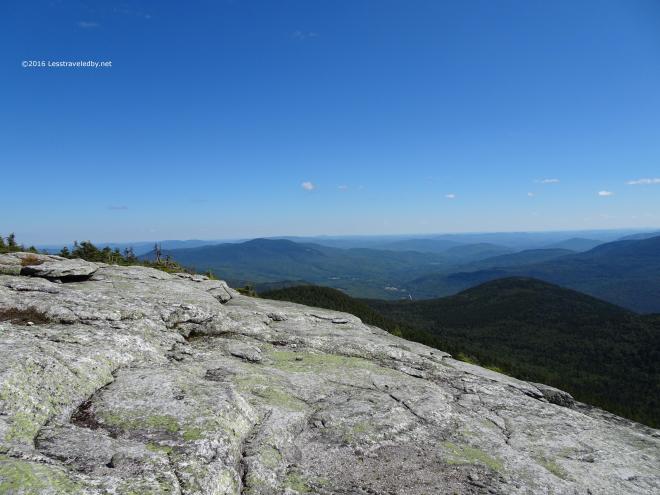 Looking to the south where the mountains give way to rolling hills of farms and forests. Just a great day to be on top of a mountain with no place to rush off to.

The northwest view towards NH and VT. With the LT trip on my mind I recall looking at the shape of the mountains on the horizon and trying to match what I saw with the elevation profile in my head. 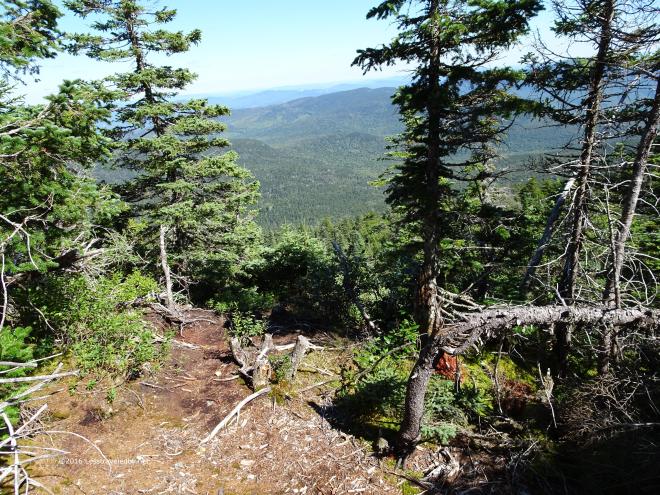 Then it was time to head down the back side of the mountain onto the Grafton Loop. Once you leave the Appalachian Trail on top of East Baldpate things change quickly. With little foot traffic the ground under foot is actually ground in many places, rather than rock. 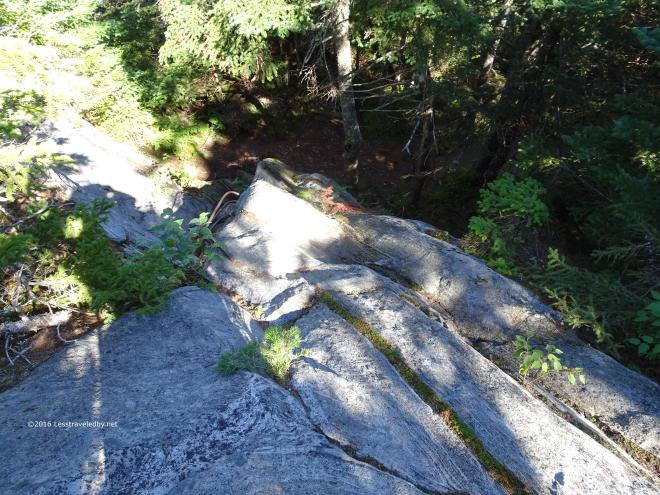 The view from the top of this rock is hard to capture on a camera, but when you stand there in person you can see just how far down you are heading. I’m glad the trail maintainers saw fit to build the rungs into the rock to encourage folks to take the direct route. This is just the sort of spot folks will do a lot of damage to trying to find easier ways around.

The view from the bottom gives you a better perspective on what a person would face without those rungs there. Not the worst notch I’ve ever had to wedge myself into to climb, but coming down would be dicey, especially when wet. 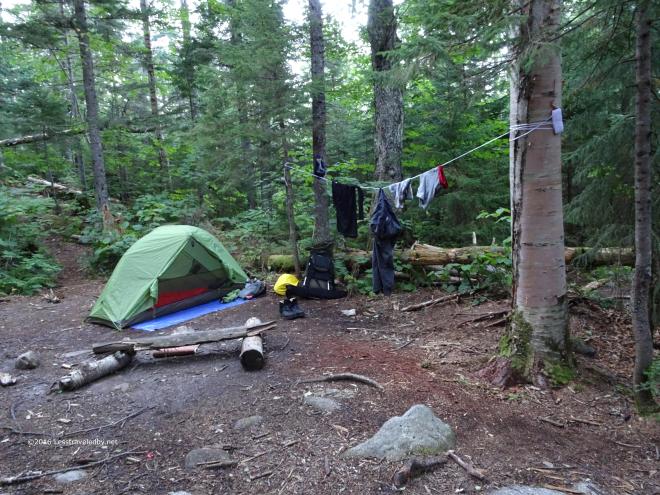 My usual spot at the East Baldpate campsite which despite the name is well over two miles from the summit. The sites on this side of the loop are under the care of the MATC and only lightly improved. There is a latrine and a network of paths leading to some open spots for making camp. No fires are allowed anywhere on the Grafton Loop so be sure to bring a stove if you come here.

After a peaceful night it was time to head back up to see what the morning views looked like. 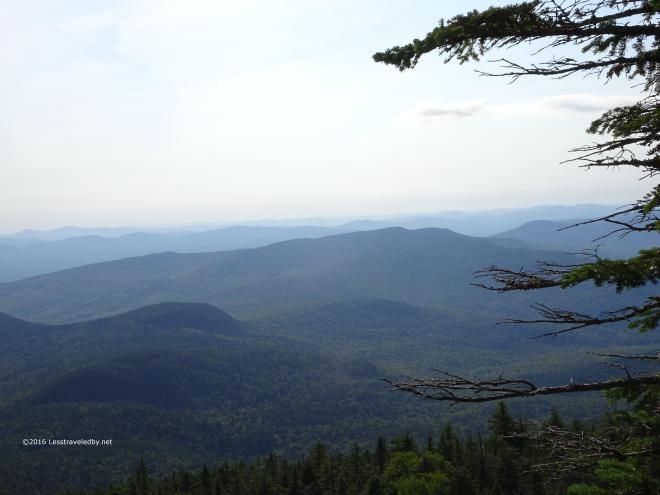 It was a bit hazy so the horizon was a bit closer than the day before, but it was a beautiful morning indeed.

Up top at the east summit the wind was blowing strong. I’d worked up a bit of a sweat steaming my way to the top and despite the views didn’t stay long in fear of freezing to death.

Heading back up from the col to the West Baldpate summit taking advantage of another nice ladder. This spot had some moisture on the rocks and would be quite treacherous without the aid. I take on whatever I find on trail, but always appreciate the effort when someone builds me an easier way.

One last view before heading down into the trees. Yup, it might be a lot of work to climb up to these places, but worth it to have moments like these.

One thought on “Baldpates Overnight – August 2016”