31 pictures and some babbling from a three day Pemi visit in late April. My research told me that the snow was rotten up top so I left that to the folks who don’t know any better. Staying low along the river was the plan, but I carried snowshoes and crampons since I didn’t know what I’d run into farther out.

Hitting Lincoln Woods about lunchtime meant I got to enjoy trailhead sandwiches before putting on my pack. Being the first motorcycle trip of the year they’d had to ride in the saddle bags, but were darn tasty even if they were a bit squished.

With temps in the low 70s I was happy to take my first break about four miles in. It was nice to be sweating in the hot sun rather than sweating in the snow for a change. It will get old soon enough I’m sure, but it was a beautiful Spring day. 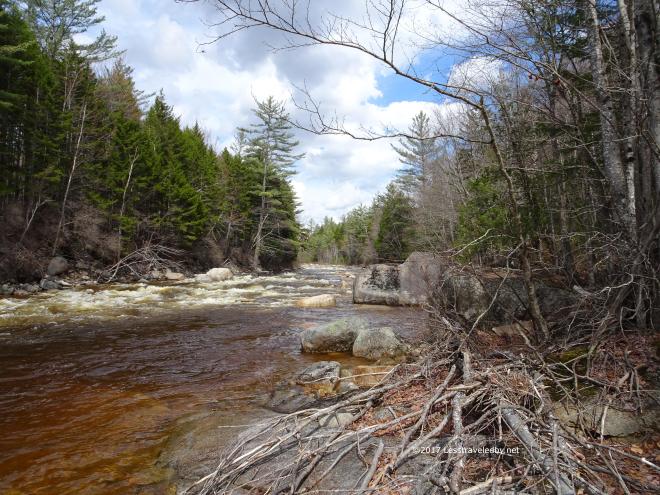 The East Branch was looking full but not particularly angry. If it wasn’t so cold it might have been crossable. As it was I’m pretty sure the lower body would freeze before you got half way and you’d collapse. Also pretty sure I’m not gonna try it to find out heh.

There were some patches of snow that remained in the shadows. In the shade you could feel the residual cool despite the warmth in the sun. 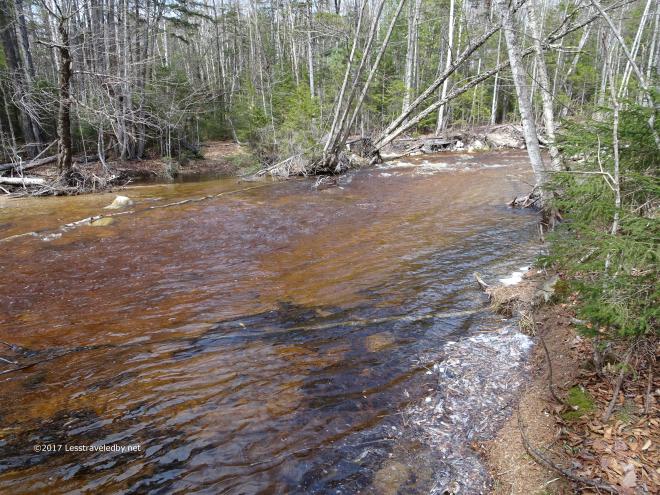 Cedar Brook was not going to be a rock hop this day so I was glad it was warm. That water sure wasn’t! I eyed some trees that a younger man might attempt to use as a bridge, but I’m either too wise or too old for that stuff. I put on my water shoes, hung my boots from the top of my pack and squeaked like a chipmunk when I hit that cold water.

There was water everywhere in various forms. Small rivulets squeezing out of the dirt, minor cascades and often at least the sound of the river roaring somewhere in the trees.

The brighter sunlight of Spring made the forest look greener though the birch buds were yet to burst out into leaves. Winter trips on short days mean I don’t get very far on the first day so it was nice to be getting deep into the wilderness so quickly.

Being wilderness the definition of trail changes from what you get in “civilized” places. This is not a water crossing. This is the trail! One of the many reasons I prefer to wear heavy leather boots is the joy of stomping down a trail like this. 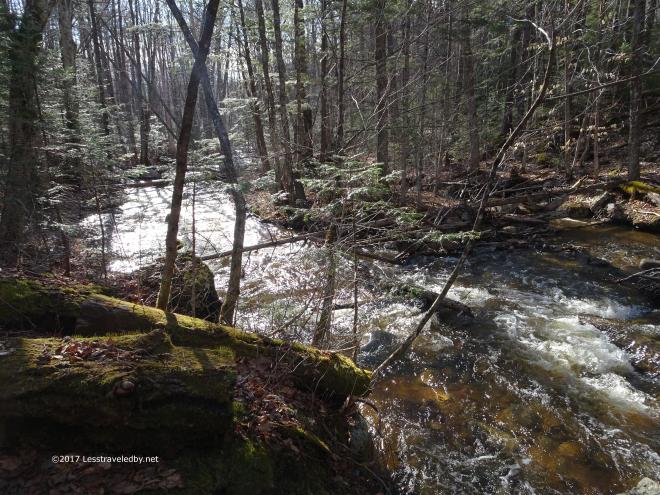 This thankfully was not the trail. This is a normally dry channel that sometimes has a small creek at the bottom which is easily rock hopped on large boulders. This time it was a serious brook with the boulders under water. After looking up and down the channel a bit and not finding an easy crossing I took it as a sign to make camp for the night. Getting into that cold water late in the day didn’t sound like fun and I figured the flow would go down over night.

Just as well to stop early as this was my first time making camp in the wild with the new hammock I’m trying out this year. I wanted to be more flexible in where I was able to camp on longer trips so am seeing how this works for me.

I’m still waiting on the custom tarp that I ordered so for this trip I just used a cheap plastic tarp from Reny’s. The ridge and guy lines make this crappy tarp look pretty good so I can’t wait to see what the fancy tarp looks like heh. 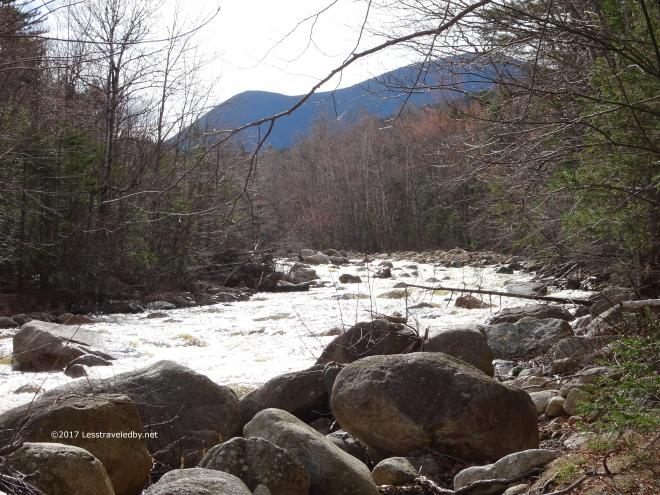 The next morning I was able to cross that channel with my boots on as the water had come down a few inches. It was a day farther removed from a rain event and snow melt on the mountains slows down at night. I was just happy I didn’t have to start my day by putting my toes in that water! 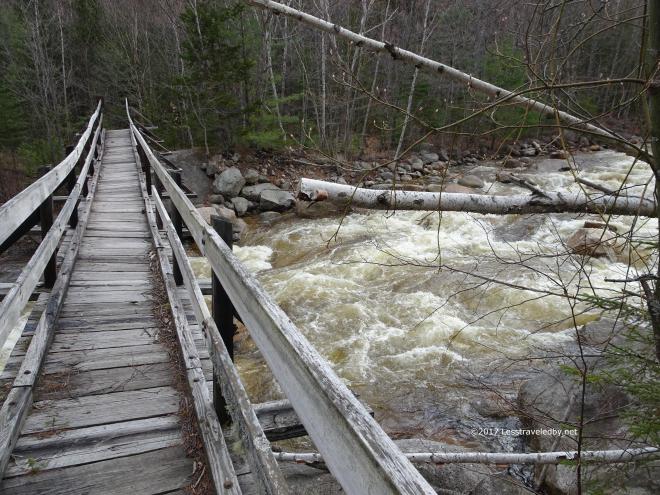 The old bridge over the East Branch continues to decline. Glad they haven’t take it away yet and hoping they do the right thing and replace it. Would be a shame to lose access, but no sane person is going to be crossing this river most of the year without a bridge. I walked carefully to avoid bouncing the structure and didn’t linger to take pics in the middle like I used to. 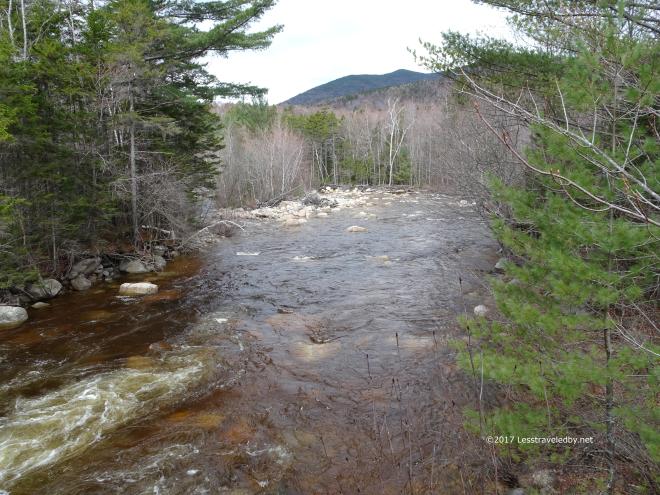 Looking downstream after reaching the other side you can see that this is just not a river you want to play in. Even if it wasn’t freezing cold it is wide and deep with a powerful flow. I appreciate every visit up this trail because I know it could be my last. If that bridge goes unreplaced I won’t likely see these spots again.

Another minor side channel that had a lot more water than usual. This is another time when good waterproof boots come in handy making this an easy rock hop.

With the leaves not yet out it was possible to see much deeper into the forest than usual. This pile of relics from the old logging camp usually is passed unseen. I’m not sure when exactly old junk becomes an artifact and pondered that a bit as I headed up the trail. 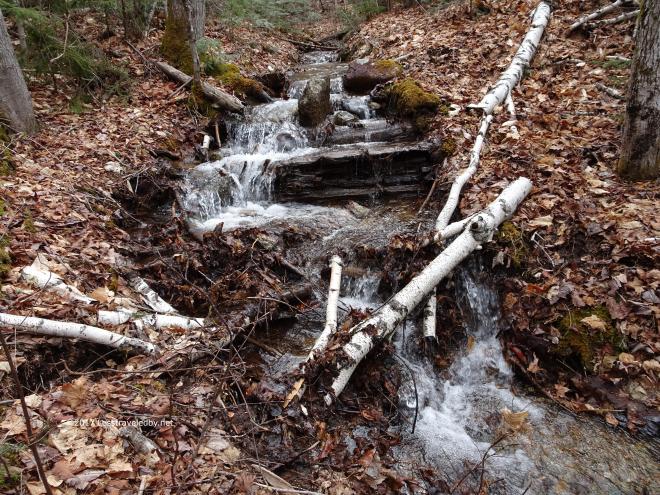 Lots more flowing water here as the ridge to the East of the trail is punctuated with seasonal flow channels like this. They only run a few months of the year and then go dry except for a couple of them which remain as small trickles.

This time of year they are beautiful and the woods is filled with the sound of flowing water. I had a great morning walking on a trail that showed lots of sign of animals, but little sign of humans. There were at times patches of snow with faint signs of old ski tracks, but no human feet had left prints in the mud. 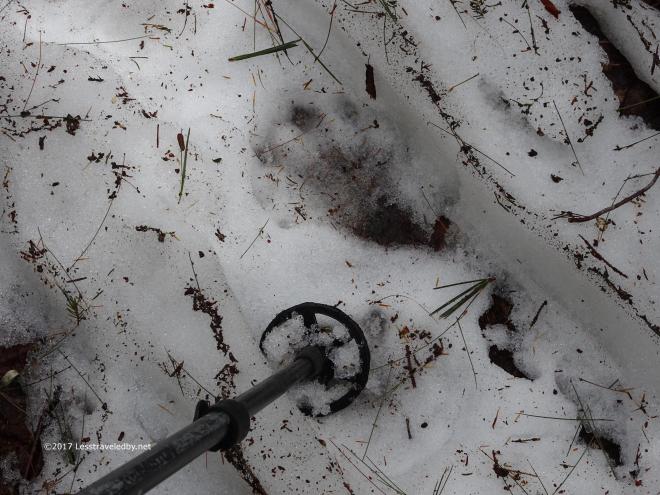 There were lots of moose tracks and a few bear tracks as well. This one was a good six or seven inches across. I’m no tracker, but that seems like a big enough bear that I was glad the print was so old. 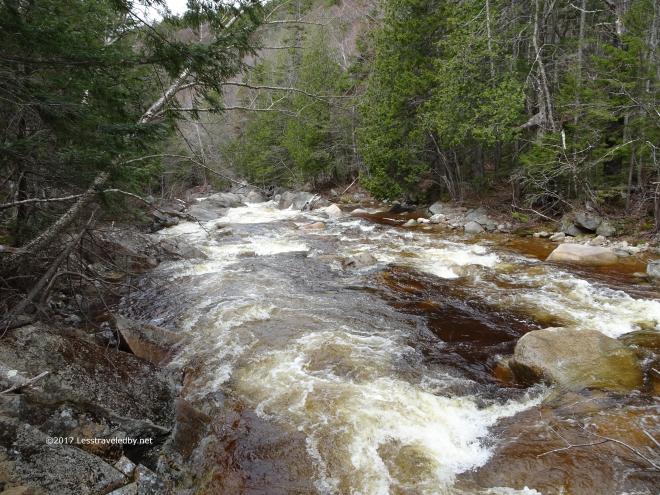 I continued on along the North Fork until the snow began to obscure the trail as I reached the base of the climb up to the falls. After standing in one spot debating if the trail was the patch of snow to the left or the patch of snow to the right I decided to skip the falls rather than risk getting lost. I’ve done this trail in the snow before and that section is really hard to follow.

I decided to be lazy and set up the hammock to enjoy lunch. Ended up spending the entire afternoon swinging in the breeze and might have even napped a few times.

Thankfully the spot I had picked for lunch was facing the right direction to set up the tarp to block most of the wind. It was really gusting as a front passed which dropped the temperatures a bit. It also was really rocking the trees all around me including the ones I was hanging from.

Morning found me a bit chilly as the wind had stolen a bit more of my heat than I could spare. It wasn’t quite freezing, but definitely colder than I was equipped for. Coffee was the perfect solution to that problem!

Hiking out I was in high spirits. There had been talk of cheeseburgers for dinner when I got home so I was motivated. Thankfully I didn’t break my leg on this old railroad spike sticking up out of the trail. 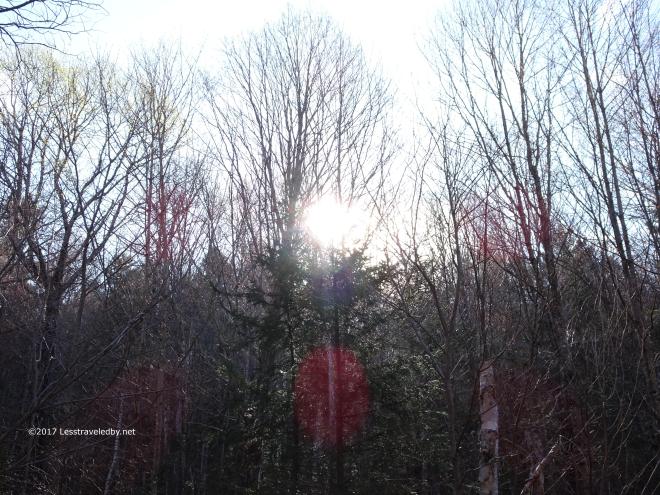 It had been a few days since I had seen even a sign of another human so I felt it was safe to sing a bit as I headed down the trail. It just feels so great to wake up in the morning and go for a walk in the sun! 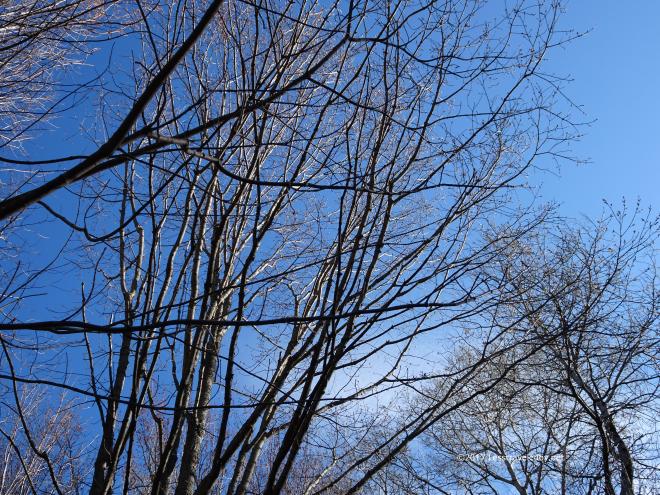 The trees were closer to leafing out. Another day or two and the forest likely started to turn green.

I was really flying down the trail and soon could hear the East Branch roaring up ahead.

The sun on the water was amazing, but no matter how pretty it looks I always feel the power of that water when I look at it. It may look nice but it would kill you in a second if it got the chance. 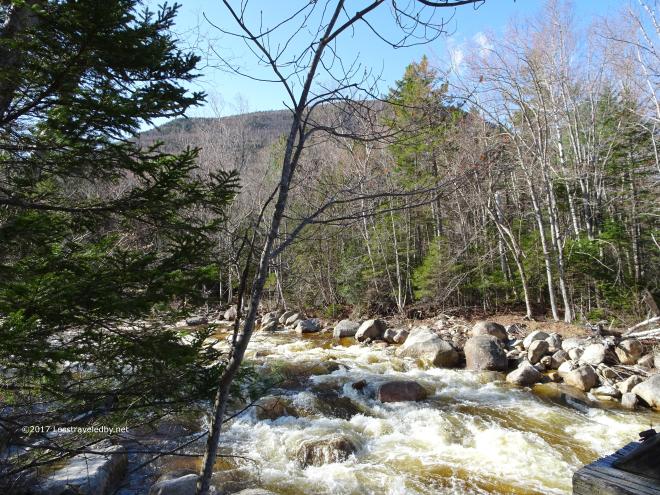 Still you have to admire that beauty. I could sit here for hours and watch, but promises to keep and all that. Promises of cheeseburgers!

So I stomped my way back out. I was well passed the tentsites before I saw my first day hiker. Just shy of 48 hours without human contact, which isn’t bad, but I could have used a few more days. 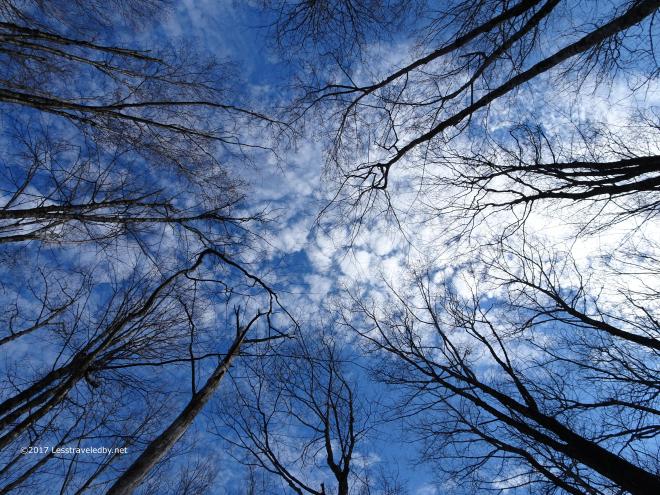 I’ll leave you with this for now. Lots of trips planned for this season with the first family Baxter trip in just a few weeks. Hope you folks are getting out when you can!

One thought on “Thoreau Falls Without the Falls”