That terrible moment when a piece of vital equipment fails is something you can’t really practice for. Still, it can happen at any time so you’d better be prepared to deal with it.  Your assets may include all the stuff in your pack, but your wits are the biggest thing you’ve got going for you. Depending on just how vital the equipment is or the circumstances which caused the failure there may be some adrenaline or emotional stress to deal with first. Cuss, cry or meditate as you think best, but taking a few minutes to get your head together can be a good idea before using it to figure out what to do next. First do no harm applies here. You don’t want to make the problem worse.

That fractured aluminum tube in the picture is the base of the frame from my backpack. After tearing down camp on the morning of day 3 of a family Baxter trip we were ready to get an early start heading to our next site. Throwing my pack on was the final thing to be done and when I tossed it up onto my back there was an odd snapping sound and I could feel the pack lose its shape, slumping off my shoulders. Can’t recall if there was any cussing, but there definitely was some adrenaline.  We were only about 3 miles from the nearest trailhead, but the Daddy Pack is key to moving the majority of the weight and a large part of the volume as far as the entire family gear load.

Thinking fast I implemented that all important step; mellow out. Rather than rush into some ill guided, frantic effort, I told the girls to take off their packs because I didn’t know how long we’d be. Then I sat down by the fire ring and did some pondering. Once I started I was surprised at how fast I went from freaking out to finding solutions. Needing a strut to stabilize the bottom of the pack I considered dismantling one of my hiking poles and using the bottom section. One look told me that it was too large to work very well so I was glad I didn’t rush into tearing apart the pole. Then I had another idea…

With the guyline attached this tarp stake made a darn fine splint. Using first aid skills I set the bone, err I mean I set the frame so it was lined up properly and then laid the stake across the two pieces. By wrapping the guyline around and around while looping it through the loops from the pack I was able to get a pretty solid connection despite the break being at such a difficult spot. 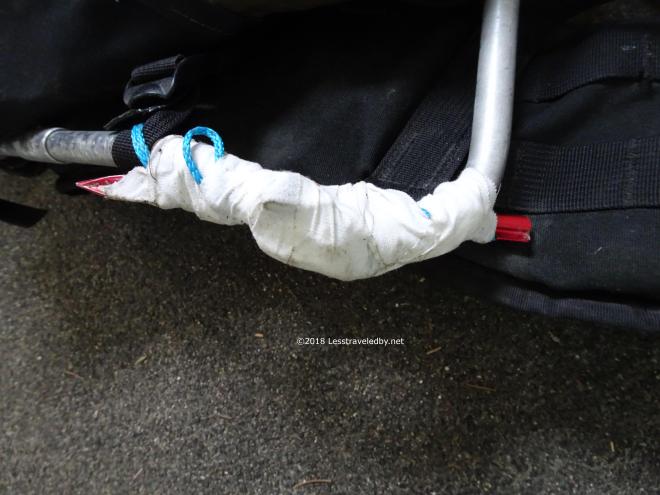 Rather than hope the line would hold for the hike out I opted to keep going. Belt and suspenders can be a good idea sometimes 🙂 I didn’t want to risk the jagged frame cutting through the guyline if the fracture opened up on trail. I’ve carried this nice cloth tape for blister treatment and other first aid for years without using it once. Now I was glad I had it along because it made for a strong addition to my repair.

I was happy to feel the pack remain intact as I tossed it onto my back to test it out. Before I fully hooked it up I asked Frau Stranger to scope things out from behind and see if I was going to stab myself with the stake if I stood up.  She said things looked good back there and I figured she was talking about the pack so gave it a go. That repair may not look like much, but it held up just fine to get back to the car. The pictures were actually taken after we got home a few days later so it held up very well I’d say. We changed our plan to camp  closer to the car for the last few nights rather than risk heading into the back country, but I think it may have held up on trail for quite a while if necessary.

Like I said at the start, you can’t really practice for repairs because you never know what might break or how. What you can do is start thinking about what you carry that can be used for other purposes in an emergency. A repair kit that includes a needle and thread and some duct tape or other strong, waterproof tape can come in handy. Zip ties and spare pack buckles are also common additions. I don’t actually carry a dedicated repair kit, but my first aid kit includes scissors, needle, thread and tape. Like most things on trail, repairs are just another puzzle to be solved. That is why the best thing to have in your repair kit is your wits. Should you hear an ominous snap or tear on your next trip, and I really hope you don’t, remember to get your wits out first 🙂