With the Fall colors fading along with the autumn sun I figured I’d best make one more run into the Pemi Wilderness before the snow started flying.  The plan called for a relaxing few nights in the woods with no major climbs and for once things went pretty much according to plan.

I arrived a bit chilled after a few hours on the scoot, especially my hands. It was definitely getting late in the season, but there was sun on the Lincoln Woods side of the pass. I warmed up a bit as I unpacked and scarfed down a sandwich I’d tucked into the saddle bags. A guy coming off the trail and packing up his van stopped to admire how I’d gotten my gear there strapped on the bike, though he may have had his eye on my sandwich as well heh.

With nice cool weather and no one to slow me down I headed out on the Eastside Trail at a good clip. I soon passed the gate into the wilderness at the far end of the campground three miles in. Having made more than a few trips on this trail it is becoming comfortingly familiar. Ticking off landmarks is like loosening a belt as I get deeper into the wilderness. The Cedar Brook crossing followed by the climb up the hill to the Cedar Brook Trail sign, the confusing intersection where the trail to the old bridge remains an unsigned mystery and finally the Thoreau Falls Trail sign.

All my previous trips had taken me on the Thoreau Falls Trail in one direction or another if not both. This time I stayed to the right and found myself on totally unfamiliar ground. This stretch of the Wilderness Trail tended to stay up high and back from the river. Eventually the trail crossed over the river near where the various notch brooks join with the Shoal Pond Brook.

I set up my little stealth camp as the light began to fade. Admittedly that wasn’t all that late this time of year, but I wanted to filter some water and get dinner in before full dark.

I don’t need much space to set the Hubba up, especially in nice weather when I don’t need to use the vestibule. Note the carefully undisturbed baby pine at my front door. In the morning, once I picked up my gear I just fluffed the leaves a bit with my poles and you’d never know anyone had been there.

Having gone to bed early I was ready to go at first light. I had breakfast, packed up and was on my way in time to capture some early morning steam in the Stillwater area.

There was still some color in the trees here and combined with the early morning sun and the steaming brook it made for a spot worth stopping to appreciate for a bit.

Heading up the Shoal Pond Trail I soon came into this stand of pines. The ground below was relatively open making them seem amazingly straight and tall.

The trail followed the Shoal Pond Brook for a while. Even with the very dry year there were still pools and small falls to be seen. Not sure I’d want to try some of these crossings in a wet year from the size of the beds.

After leaving the brook behind I hiked on and up for a bit. Just when I was starting to think the trail must have bypassed the pond I came into this boggy area and stopped to look at Whitewall Mt in the distance. Then I noticed a splash of blue out there and realized I might get to see the pond yet.

The trail actually followed near the shore for a while with some access to the water.  There also were what looked like some camp sites along the trail though they were way too close to the pond and the trail to be legal. The water had that brownish color one expects to find in ponds, especially late in the year. I knew I’d be seeing a brook again soon so I didn’t mess up my filter here.

I did stop for lunch at the AT intersection. The raised bog board there seemed designed to be used as a bench as my stomach pointed out so it seemed a good idea. 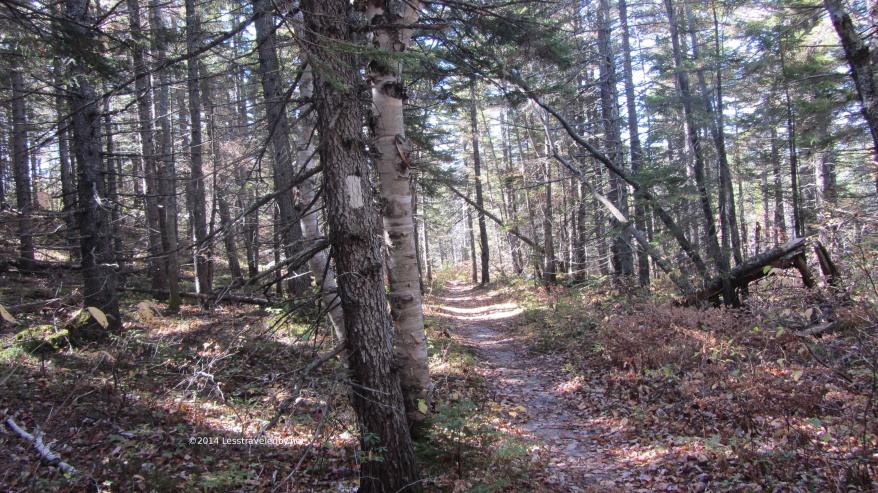 This section of the AT between Ethan Pond and Zealand Falls is a gently flat section nestled in the middle of the rocky steep trails one expects in the White Mts. 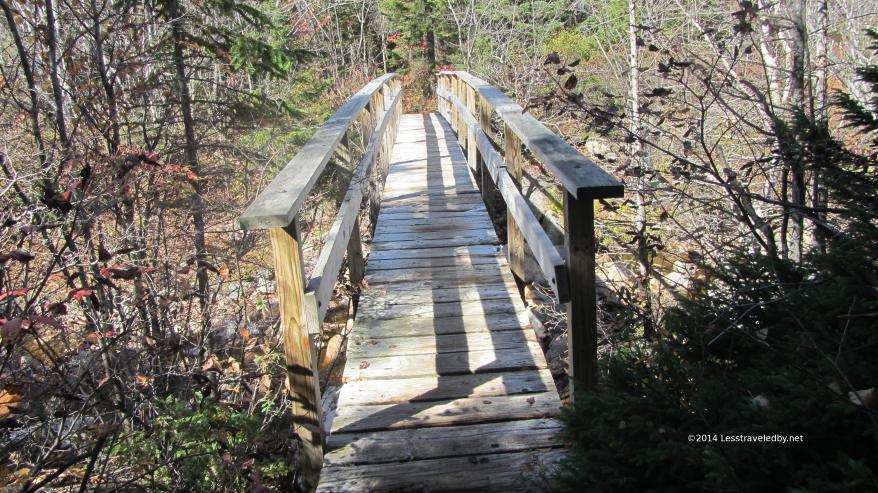 There is even this pretty little bridge over the upper reaches of the North Fork above the falls. After time in the wilderness area where there are no bog boards or even blazes it seems like the height of luxury.

The trees in this area had been pretty well wind scrubbed of color leaving the pines to stand out.

Thoreau Falls was running even lower than the last time I came this way. I have a feeling this also would be an overly exciting crossing in high water, especially given the big drop of the falls below.

There was something to look at there that day though! I must have taken a few dozen pictures here hoping that one of them might capture what I was seeing. There was a nice couple I met there having lunch and once we all got over the shock of seeing someone else out there we had a lovely chat. They seemed to be doing a series of day hikes and were impressed with my ability to rattle of peaks and trail names. When they heard that I was camping in the wilderness rather than at camp sites they seemed surprised. I guess some folks are ok with visiting the wilderness for a few hours but they don’t want to live there heh. 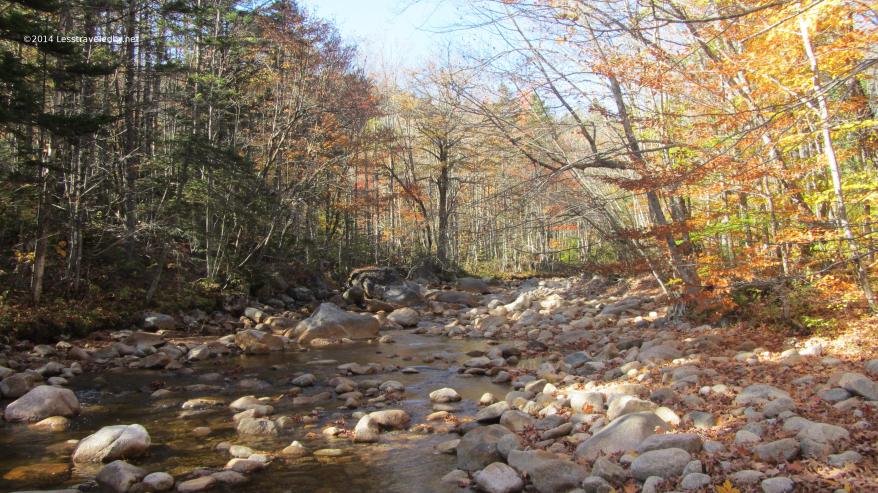 Farther down the trail I found a place to set up camp and enjoy the heart of the afternoon in peace. The carpet of dry leaves here was thick and every gust of wind set them rattling.

I had plenty of time to enjoy the faded sun on the faded leaves with the brook gently bubbling at my feet. In my role as gear reviewer I was working on several edible items which was great as it gave me an excuse to eat several snacks so I could photograph them being used in the wild.  Well and because sitting around eating after hiking is something I enjoy.

The days are short this time of year though and sadly this would be the last I’d see of the sun on this trip. I’d been up early and it was dark soon after dinner so I found myself in bed by 7pm. By the time it started to get light almost twelve hours later it seemed I’d been in that tent a few weeks. I’ve been trapped in a tent by weather for long periods before, but I tend to find that exciting and fun. A long night of tossing and turning between a series of fifteen minute naps just made me cranky.

The weather had turned by morning with a storm expected later in the day. My plan had been to hike out to the tent sites and ride out the rain there before riding home the following day. This was my view from the footbridge looking towards the Bonds. You’ll just have to trust me that they are back there behind those clouds.

With the nice cool weather and the flat trails I found myself at the tent sites before 11am. It was a Saturday and there was only one or two sites occupied. I started pondering which site would be best for an extended rain event when it occurred to me that I was just a few miles from the parking lot and then a few hours drive from a cheeseburger…and boom I was out of there heh. I guess it serves me right that I got nailed by the storm for most of the ride home.