The Pemigewasset Wilderness in New Hampshire is part of the White Mountain National Forest.  The AT passes over some alpine sections there as it heads north along the ridge above Franconia Notch, over Garfield and then turns east towards the Presidents on its way to Maine.  There are a lot of loop trips that can be made with access to numerous peaks, but I opted to do some lower elevation exploration on this early season trip.  Considering the weather that blew through I was happy with my choice! 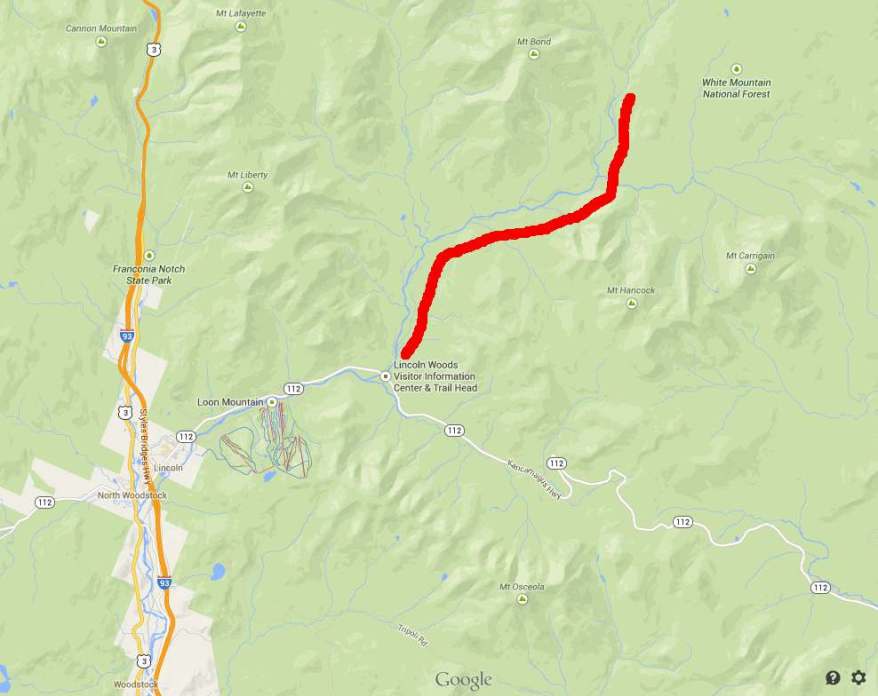 My original plan was a bit more ambitious, but knowing a storm was coming I kept things flexible.  The red line shows roughly where I ended up when the heavy stuff started coming down and I stayed put for the duration.

But let’s not get ahead of ourselves…

Every trip starts somewhere and this is how most of mine start.  Not being sure when the rain would find me I made sure to wrap everything well. Having done a lot of motorcycle camping I’ve become a master at the use of bungee cords and this load rode like a dream.

I did run into some rain going over the pass on the Kancamagus Hwy, but I was relatively dry by the time I parked at the Lincoln Woods lot.  A quick change from biker trash chic to hiker trash chic and I was on my way.

I could feel the storm was getting closer so I didn’t have any time to check out the footbridge which leads to the trails on the other side of the Pemigewasset River.  Being early on a Friday afternoon in May the parking lot and easy access trails were pretty empty, but it seemed wise to get going. 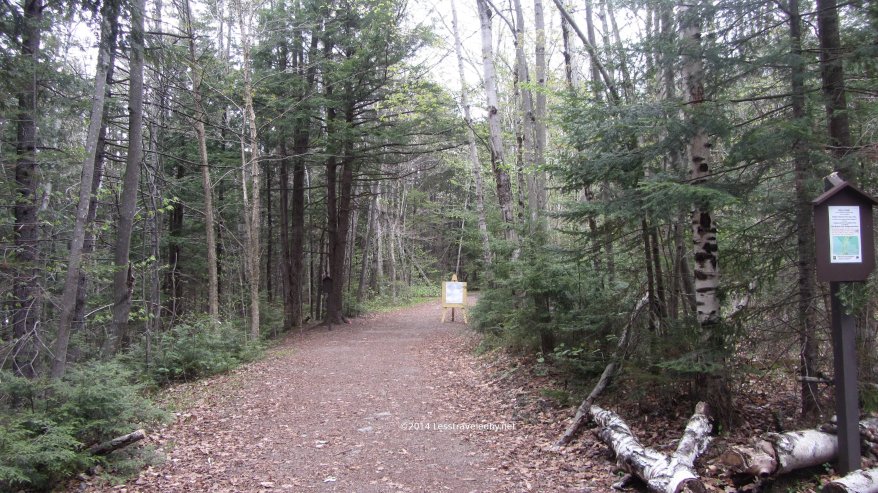 The East Side Trail was wide and well groomed which seemed an odd welcome mat for a wilderness.  Other than one very large washout this trail continued like this all the way out to and through the Franconia Brook Tentsite campground. 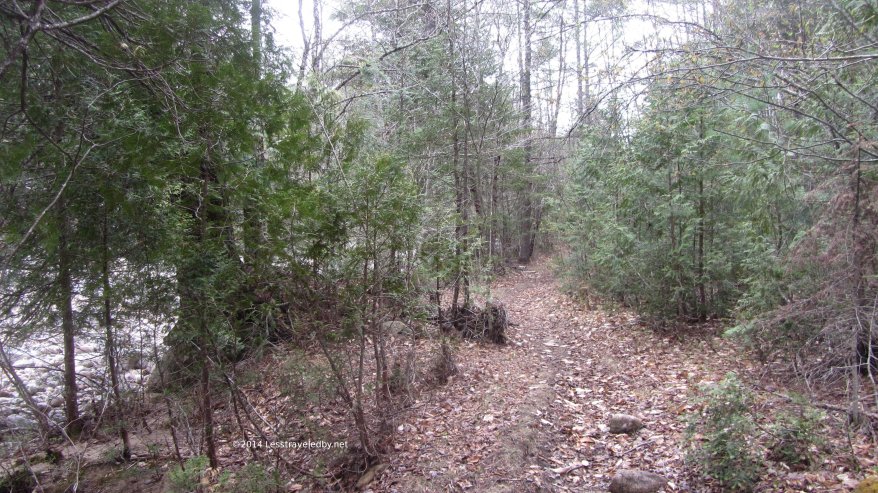 Then finally, after a gate stretched across the trail to block all but foot traffic and several warning signs about the wilderness being generally an unsupervised experience things started to look more like what I had in mind.

Two hours of hiking with one break for an elaborate dry booted water crossing found me at this impressive signpost.  I thought this was looking pretty fancy for a wilderness, especially since as near as I can tell the trails are entirely without blazes.  It just seemed like someone was trying harder than needed. 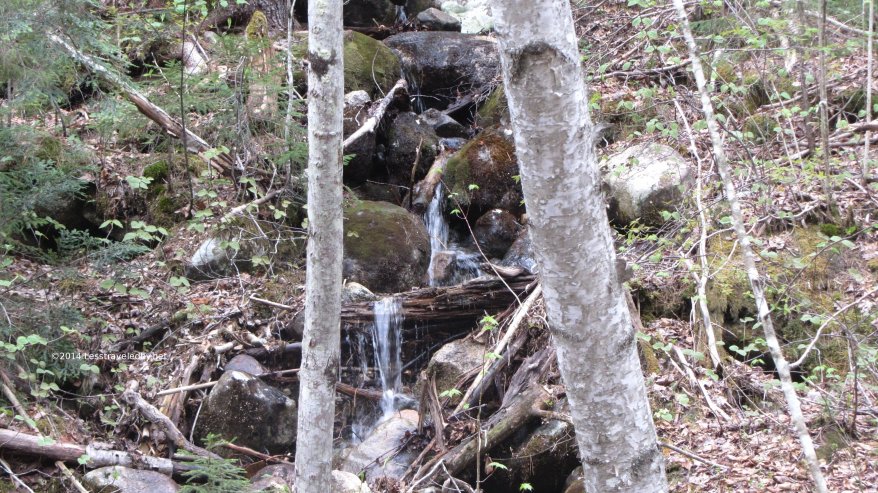 If this site had a soundtrack this is where we’d have a few bars of ominous foreshadowing.  Look at the pretty little waterfall!

This sign looked more like what one expects in a wilderness; aged, weathered and offering only appealing options luring you further on.  The showers turned to rain about this time and the camera didn’t come out again until they stopped the next morning.

Soon after the intersection above I came upon a wonderful footbridge across the Pemigewasset.  Don’t worry, there will be pictures and video of it later, but climbing up the wooden ramp in the rain to be greeted with the view of the bridge with the river was perfect.  There would be no crossing this river without the bridge and yet there was some question about if I really wanted to cross it heh.

After getting safely to the other side the rain really began in earnest and I hustled up the trail with eyes scanning the landscape around me for higher ground.  Bushwhacking in the rain is wet work and each time I left the trail to explore a promising ridge I”d find it covered in thick layers of fallen branches.  Finally I found a knob that had obvious drainage channels on either side of it and set up camp in a full on downpour.

With thunderstorms a possibility I strung up the heavy tarp I refer to as my hail shield.  It doesn’t have to stop the hail which is good because it won’t if it gets very big.  What it needs to do is slow it down enough so my tent doesn’t get shredded.  Once that was up I had the tent up in no time, stripped down in the rain and jumped inside to get warm and dry.

With the tarp blocking just enough of the rain I was able to open half the vestibule and heat water for dinner right outside the door.  I’d picked the spot for its drainage and there definitely was some slope to my bed but I soon began a wonderful series of rain induced naps.  Every hour or two I’d wake up and listen to the storm for a while, then drift off again.  Finally I had some actual sleep between two and six in the morning, but had dreams I was shooing cute little cartoonish bears away from the front of my tent heh.

In the morning the rain continued pouring down.  I’m not sure if I really noticed that the brook sounded louder than the night before but I was happy to note my camp hadn’t turned to mud yet.  I made breakfast in bed and settled in to ride out the storm however long it lasted.  Luckily that wasn’t too long and by nine that morning I was able to start wringing out my wet clothes from the day before.

The hail shield no longer needed, the cords became clotheslines in hopes the sun would stick around.  While hanging my stuff out I noticed that the brook had come up a bit over night with the storm.  That was my first clue that I’d napped through a pretty good bit of rain.

Way out of its bed the brook had spread out to cover a wide area of what had been shoreline the previous night.  I’d actually stood way out there to fill a water bag for dinner.  Sure glad I’m not one of those people who sets up their tent right next to the river heh.

I’d guess the water was running two feet or more higher in the morning.  I only know that because over the course of the next twenty-four hours it receded about that much and in the end looked about the same as when I arrived.  That is what told me it would probably be safe to hike out otherwise I was prepared to wait because not all of my water crossings had nice bridges.

A little taste of the live action version. 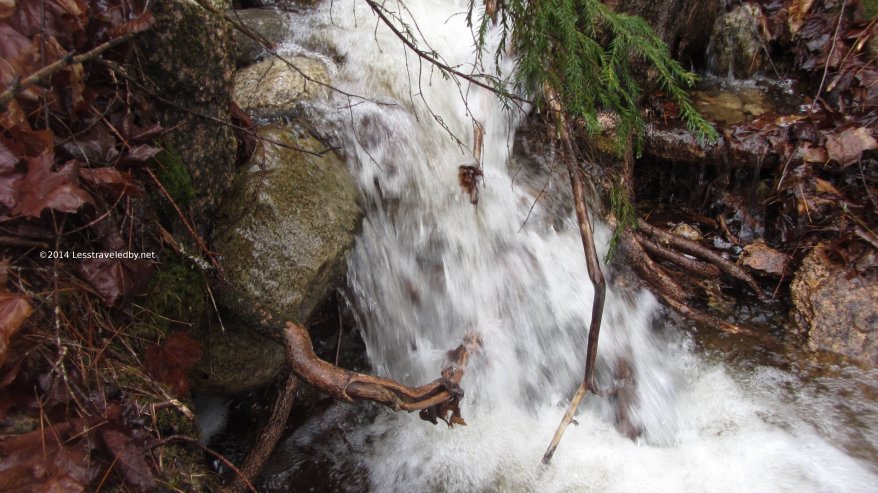 Turns out I was correct about those drainage channels on either side of my camp.   This “creek” was all but dry 24 hours later. 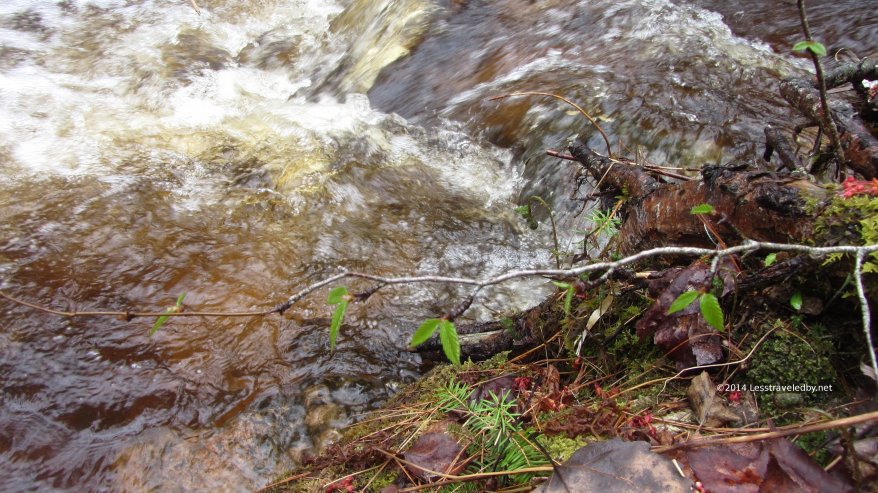 This one on the other side looked like it would run for a while longer yet but had been empty when I arrived. 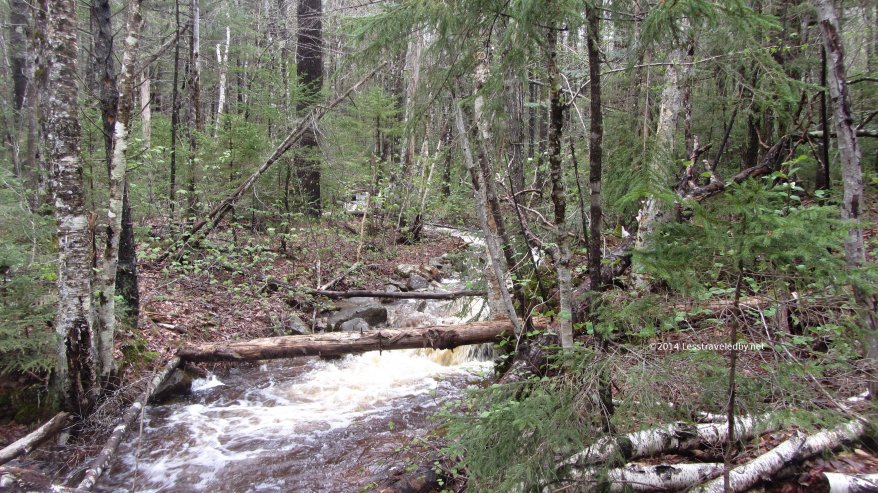 This one was a bit farther down the trail.  I’d looked at the empty channel the night before and decided that I’d go back and camp before it rather than risk getting caught on the far side.  It doesn’t look too bad here, maybe I was just ready for dinner the night before heh.

Mt Bond looking pretty in the blue skies.  The trees were just getting ready to leaf out, but pretty soon they’ll hide this nice view.

Speaking of nice views…this is the “catalog”  picture of my camp.  Never mind that real life one I showed you earlier with the cheap tarp and wet clothes everywhere.  This is what my camp always looks like!

View of Mt Carrigain from across the Pemigewasset River.  Someone had told me he was thinking about climbing this over the weekend, but when I looked up at it I had to wonder why someone would want to ruin a beautiful day like that.  I could get hooked on this low land backpacking hehe. 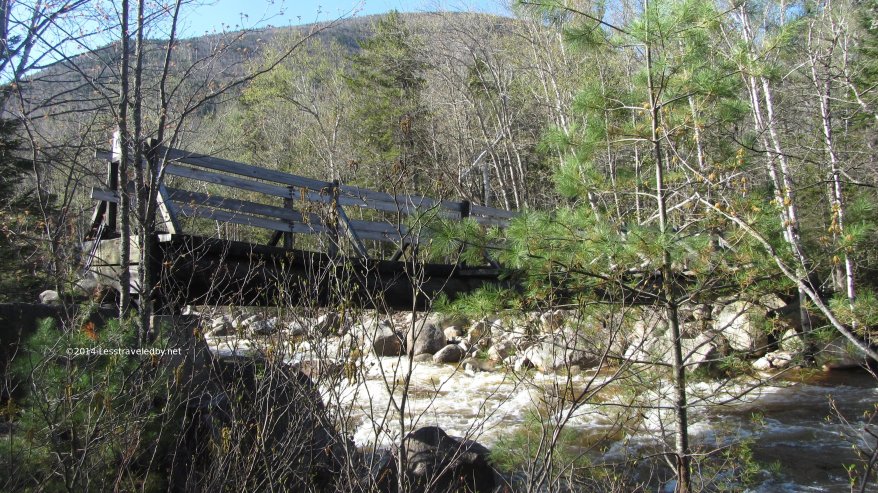 Now we finally get to see that bridge I mentioned earlier.  It seemed to have two giant trees stretched across the river for a base with a fair amount of dip in the middle.

It also had a bit of cant to it which seemed more amusing when it was dry than it had in the rain.  The roaring river right below gave it the perfect atmosphere.

This video gives you the full experience or at least as much as you’re going to get without walking out there yourself. 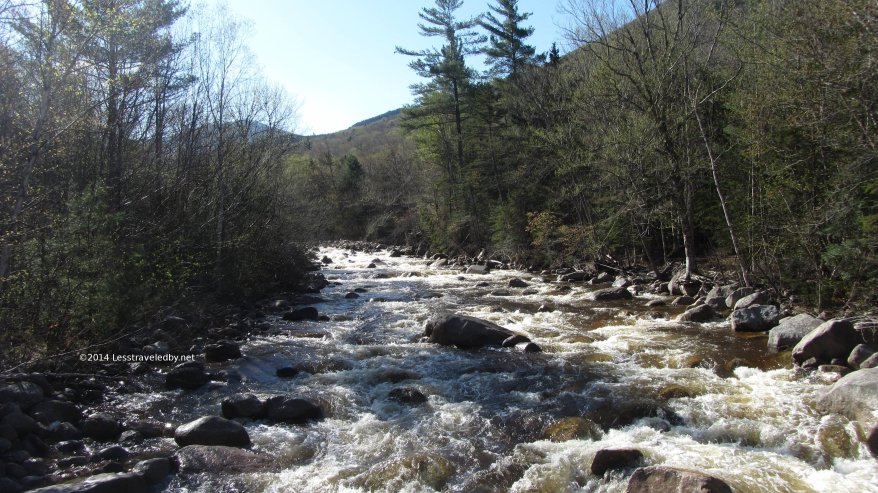 Yup, without a bridge I don’t think I’d get across there without a long dry spell first.  I can only imagine what this looked like the day before when the flood waters were coming down the mountains.

This is the site of the old suspension bridge.  This and another not too far down river have been removed so there are no safe crossings of the Pemi between the bridge I showed you and the one back at the Lincoln Woods trail head.  Not sure if there are any plans to replace either of these which I guess has both good and bad points to it if so.

Now it is time for a nature break.  The leaves were just budding and the wood flowers were all shooting up but just a few with good sun were actually starting to bloom. 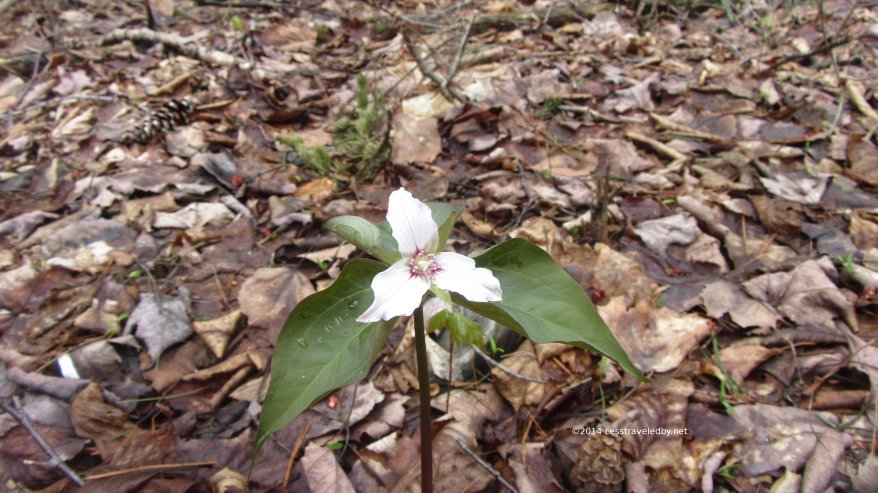 So back to “civilization” I headed and days later I still am seeing flashes of water and greenery in my mind.  On this trip I went 43 hours without human contact so I think the term wilderness can safely be applied here.  There are other more well known and well populated routes in this area but I think I will be headed in this direction again as soon as I can find the time.

If you are headed out into the Pemigewasset Wilderness or any other truly wild place make sure you go prepared.  I had plenty of extra warm dry clothes, food for several extra days and apparently made enough smart decisions to survive.  There are no guarantees out there so best to take good care any time you head out, but especially on the path less traveled by

One thought on “Pemigewasset Wilderness May 2014”