Some folks never leave the safety of their couches.  They will never know the joy of wondering what lies over that next hill or the joy of wandering over that next hill to find out.  Some of us do leave our couches though and even with years of experience and the best gear it seems wise to recognize that we are taking on risks when we head out there.

If you’re smart you’ve already analyzed the risks and tried to mitigate them.  You plan ahead, know your intended route, have the right gear and know how to use it.  All these things will help ensure things go right and that you’re prepared in case they don’t.  Making sure your body and mind are ready for where you’re headed are just as important as having the right gear.   Even casual trails can be dangerous if you aren’t focused and half way across a narrow stone ledge is no place to find your legs getting tired.

This post is really for the folks who already understand all of that.  The ones who have confidence in themselves built on a foundation of successful adventures and have that drive to go on in the face of adversity.  I want to remind those folks of indomitable spirit that sometimes it is OK to give up and turn back.  The mark of success is not reaching the peak, but rather just returning safely.  That above all else should be the goal.

Now I am not suggesting taking no risks.  I’d much rather die falling off a mountain than falling off my couch, but either way I’m in favor of putting it off as long as possible.  Actually I take on additional risk because I enjoy adventuring solo quite often.  I do that fully aware that I have no one else to rely on but myself and am greatly motivated to focus on safety.  Rather than count on getting myself out of trouble I focus on not getting into trouble.

That requires that thing I’ve discussed before; Situational Awareness.  Being mindful of your environment is where it starts in this case.  You can only avoid the potential injury you see coming.  That means still seeing trees and rocks even after days or weeks of looking at nothing but trees and rocks.  It means remembering where that kettle is coming to a boil as you dance into your wet trail clothes in the morning so you don’t knock it over.  It is a constant and fluid analysis of everything going on around you.

With that in mind I want to talk about recognizing that turning back is an option.  All too often people focus on pushing themselves to go on without fully thinking about the consequences.  That sounds great for a character in a novel or film, but in real life consequences can go beyond painful to deadly all too easily.  I love to push myself to my limits in that wonderful test of will that a good adventure can bring, but only so far as I can be reasonably sure of coming back to tell the story.

So what is reasonable?  When should you turn back?  That is something only you can answer at any given moment on your adventure and the only way you can be prepared to make the right choice is by being aware of your situation.  The choice to turn around should rarely, if ever, come up suddenly.  It is generally something that becomes increasingly obvious as the right choice to make.

I had two trips last year that resulted in turning around.  One was a simple case of logistics as weather got me off to a late, slow start.  At the end of day one of what was supposed to be a four day loop I knew I had to abort because I had no hope of finishing in time.  Tough it out and go for it?  That sounds good but given the weather and terrain trying to go faster would have pushed the risk into unacceptable levels.  My family lets me go on these trips only with the promise that I will come back and I do my part to make sure that happens.

The other trip that involved turning around was also weather related, but on a much grander scale.  Attempting an early season Freezeout/Wadleigh loop in Baxter State Park we were set upon by a deluge.  This rain started as a good soaker and steadily increased to a downpour which didn’t let up for about 36 hours.  The brook our trail followed was a roaring brown and foamy beast.  The up and down hill sections of the trail were like creeks, ankle deep in flowing water and mud.  The bottom sections were either lakes or channels feeding the brook depending on drainage.

We hiked all day in these conditions and as the afternoon waned were all looking forward to reaching our camp for the evening.  Then we ran into a wide area of flowing water coming down from the hills and into the raging brook.  Not daring to attempt the crossing so close to the brook we began bushwhacking our way up this stream looking for a place to cross.  It had climbed over its banks spreading across an area a hundred yards wide or so that was only knee deep, but somewhere out there was the original channel.

Finally after a quarter mile or so of bushwhacking we found another trail coming up out of the creek.  This was our intended trail out of the area in the morning to our next night’s camp.  Already looking at the situation and determining that going forward was looking like a really bad idea we decided to see if we could skip ahead to the following night’s camp.  We didn’t get far before finding that this trail was also blocked headed in that direction by another branch of this same creek.  We stood there calf deep in flowing water pondering our next move.  Water roaring all around us made us shout to talk it out, but all agreed that pushing on in either direction was the fool’s option at this point.  We headed back the way we’d come and camped at the shelter we’d stopped at for lunch earlier.

In the morning we all agreed that despite the longer distance going back the way we’d come made more sense than trying to forward.  The rest of the route would have taken us into what is normally a bog and after the rains was now probably a lake.  So did we leave feeling defeated and somehow lesser for the experience because we didn’t finish our loop?  Absolutely not!

This trip was one of the most fantastic experiences I have ever had.  We were already taking on a loop that very few people make every year and then in the face of an outrageous storm we went to the limits of all but the most foolish of men and returned to tell the tale.  Before we left that spot I shouted something to my partners there as we stood in a foot of moving water between two deep flowing channels.  I said, “Remember this moment well, because no matter how many times you tell this story, and you will tell this story, no one but us three standing here will ever know what this was really like.”

Would we have died if we had gone on?  Maybe, maybe not.  That question never really bothers me because what matters is we were smart enough to not find out.  What more could possibly have been gained than we did by going as far as we did?  Two paths submerged in a yellow wood, we turned around rather than go forward to drown and that has made all the difference on the path less traveled by 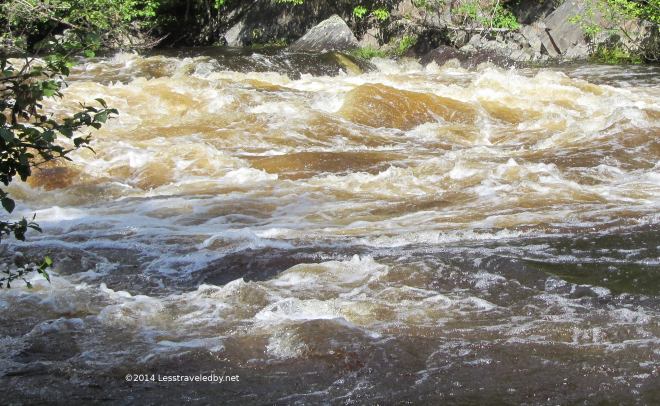