Open water on the Androscoggin in January? Despite a few bursts of chilly weather the river has remained unfrozen this year. Considering there is a dam just a couple miles downstream and the channel is deep keeping the current relatively gentle this is very unusual!

Thankfully we finally have some snow that didn’t melt within a few days. Last weekend there were quite a few folks out on the golf course taking advantage of the opportunity to do some skiing or snowshoeing. My wife has been waiting for months to try out her new snowshoes so she has been sneaking out whenever she gets a chance. 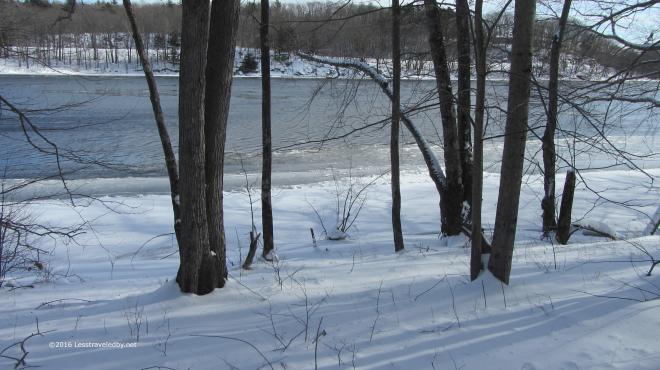 With the unseasonal weather my Winter camping plans have not been given a chance to be implemented. I’d been working on a gear sled, but haven’t bothered to finish it. I did get a chance to test out parts of the system by giving my daughter a ride around the golf course on it. She makes a great testing load and didn’t even complain when we lost control on a steep downhill tossing her into the snow. Actually I think she liked that part best!

Hope you folks are enjoying whatever your Winter is bringing you. As much as I love getting out into it this time of year I’ve sort of given up on this season and have started thinking about what comes next. I do have a few cold weather gear items in testing right now so hopefully Spring doesn’t come too soon, but either way I’ll be out there!