I’ve been keeping it quiet, but the excitement has been building as the time draws closer. The Long Trail is on! In the morning I’ll head up to Journey’s End to spend the night, probably giggling, before starting southbound on the trail on Sunday. My ride home is scheduled for about a month later, so I’ll be in no hurry. Hoping to have enough contact with the world to post a bit along the way. Should be a very pretty trip if the leaves and weather cooperate.

Those who have been reading for a while know that I’ve been trying to do this trip for years. It started as an impossibility, then matured into a full fledged pipe dream. That is where it stayed for the last couple of years with something always preventing me from getting out there. Hopefully all of that was meant to put me out there at the right time. I’ll be finding out soon enough and will let you know how it turns out 🙂 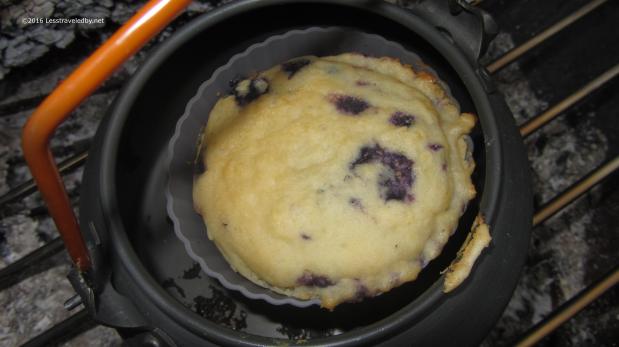 Taking advantage of a fire we made in the back yard to cook pizzas I did another test muffin last night. I used a bigger fire this time, just coals, but more than the previous test. 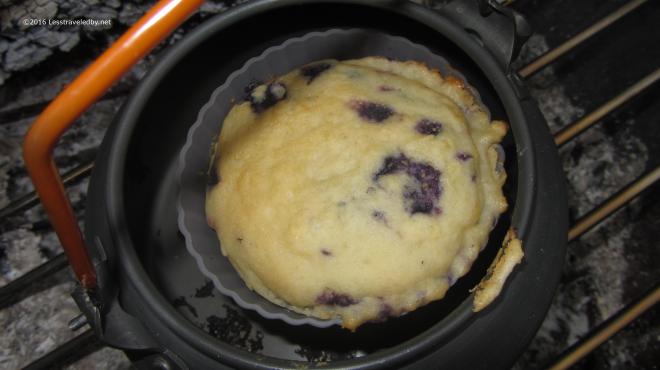 I also broke out the new, oversized, silicone muffin mold. As you can see experimental muffin baking is not an exact science and there were a few issues with escaping batter. That was due to an unstable spacing platform under the mold. 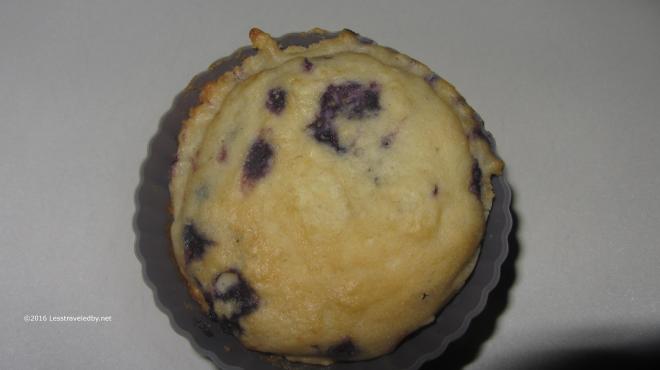 You can see the higher heat did a much better job browning the top of the muffin. I guess twig fires might work if you were willing to work that hard, but a good coal bed seems the way to go.

That bottom is nicely browned and looking like an actual baked good. The untreated mold released pretty well leaving an easy clean up job and a nicely formed muffin.

Here you can see cause of the problem; the folded aluminum foil spacer was too small to hold the muffin as it baked. Uneven heating made the batter rise more on one side and the muffin tipped over. I either need a bigger spacer or a wider platform on top to act as a tray to hold up the mold as it bakes.

Enough about the failures, lets look at the successes. Out of the mold this baby looks like something a mother would make in the kitchen at home. Nicely browned but not burned and a bit of character to the  uneven top.

Inside you can see this time it baked all the way through. Using twice as much batter and the over sized silicone mold results in a nice sized treat. Definitely going to have to find space to carry a few bags of mix on this next trip to do some field testing, but it tasted pretty darn good here at home.

Hitting the trail for a few weeks so the next round of experimental kettle baking will have to wait for a bit, but I have some other ideas I’d like to try out. Bread or biscuits would be nice I’m thinking, maybe with some jam or honey, though they’d be great plain too after a week or two without. Have to ponder how to make an easy sweet roll out of a bag, but that might be pushing it too far heh.

With long Summer trips approaching I thought it would be good to do some test runs on a few ideas I have to liven up the food bag this year. This baking experiment uses mostly items I will have with me already, so there is very little added weight for what I’m hoping will be a great morale booster on trail.

I used our backyard fire pan for this test, but on trail I can easily make a small bed of coals or take advantage of a social fire at a shelter. Over the fire I set my Purcell Trench Voyageurs Grill which I carry for emergency trout cooking. Then I set down the metal top of a #10 can to keep the fire from scorching the bottom of my kettle.

Inside I had two very light aluminum baking molds, one on the bottom inverted to act as a spacer and the second on top and filled with my muffin batter. To make the test authentic I used a random amount of water added to a random amount of muffin mix in a zip bag and made certain the grill wasn’t balanced so the cup slid around.

You can see here in the middle of the baking process that the edges are starting to firm up but the center is still very wet. That is partially because I added too much water, but also because it had only baked for about 10 minutes at this point.

Another 15 minutes or so and you can see some browning around parts of the edge. The top was springy and dry to the touch so duplicating the field environment where I’d have no patience I pulled the kettle off of the fire and moved indoors to see what I had made.

The muffin held its shape pretty well when pulled out of the mold. The top could use more browning and the interior was overly moist so I’m thinking another 10 minutes or so would be good or a bigger fire as the one I was using was quite small.

Turning the muffin over revealed something that actually looked like a baked good despite being a tad underdone.

From this angle it looks even more like a real baked item in terms of texture. Clearly there is a lot of potential here for good eats out on trail, but more testing is definitely in order. Next up I’d like to try a silicone baking mold because cleaning these aluminum molds in the field would be a major pain. I used some olive oil which helped, but still more than I want to mess with out there.

Just as the quest for new and exciting places to visit is never ending, so too is the quest for delicious things to eat on the trail there. Every new thing I come up with makes the trips that much more enjoyable. Don’t be afraid to dream big, just make certain to test things out at home first where mistakes won’t leave you hungry. 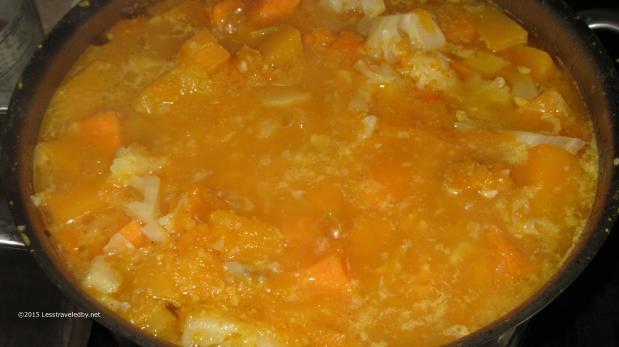 I don’t usually write about food, other than eating it, but I thought this might be of interest to some other folks, whether they are backpackers or just like squash. This time of year you can often find great deals on winter squash and I’ve been cooking and freezing it in my spare time. I’ve also been making up huge pots of this very simple squash soup. We’ve eaten our share for lunches and dinners, but this batch is being dried for use on trail. If you’re tired of pasta and rice based meals this hearty soup is a nice change of pace.

Other than a little olive oil and a few spices this picture shows all you need to get started. I used a combination of acorn, butternut and kabocha squashes, but you can use whatever sort you can get your hands on. Start by heating some olive oil in a big pot, then toss in chopped garlic and onions. If you are planning on dehydrating keep the oil to a minimum or eliminate it entirely to aid drying. You can always add a squirt of oil after rehydrating.

Next add in chopped cauliflower and the squash after peeling and cutting into chunks. You can also add some peeled and cut up sweet potato if you’d like. Finally you want to toss in some vegetable stock, I used broth saved after cooking up squash for freezing, or water if you’ve nothing else. Let it cook for a while, stirring a few times until the veggies begin to soften.

At this point you could add spices, simmer for a bit and eat if you want a more rustic version. I like to run it through the blender to mix everything together, then return it to the pot before adding spices. This makes for a nice smooth soup that combines all the flavors and also dries well. My favorite spices to use include cinnamon, clove, nutmeg and curry, but you can experiment with your favorites to see what works for you. Previously I’ve used a little maple syrup with good result and my next batch I’m intending to use a few hot peppers to add some heat.

If you aren’t dehydrating you may want to skip the rest of this and go start making some soup. I’ll totally understand if you’re ready at this point. 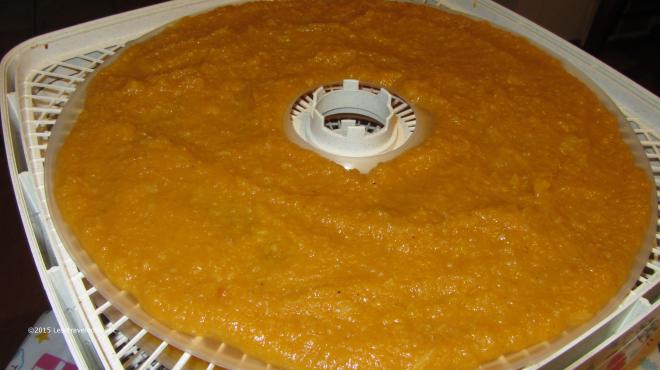 Letting the soup set overnight seems to enhance the flavor so I wait a day before starting the drying process. Each tray holds roughly one good sized portion. I try to start with an evenly covered tray to help the drying process and use a relatively high heat setting of 140°f on the dehydrator.

This batch took roughly 10 hours total to reach a partially crunchy dryness. I peeled it off the tray and flipped it over at the 8 hour mark so the back of any thicker spots would dry. The drying process filled the house with the wonderful spiced smell of the soup, but thankfully we held some in reserve for eating now.

The dried soup breaks up easily into chunks that fit in the blender when ready. This step isn’t really necessary, you can just package the big pieces, but I find it easier to reconstitute the smaller pieces. 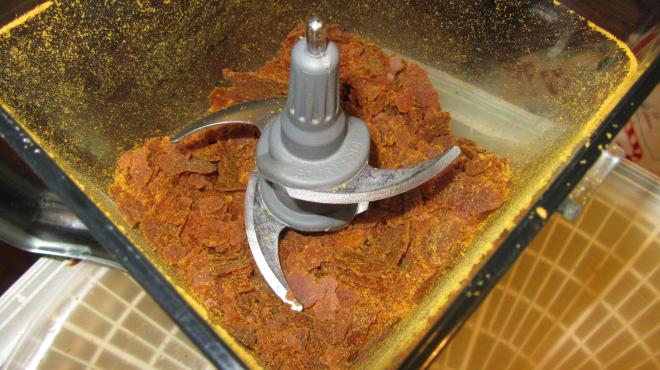 I don’t worry about turning all of it into powder. Getting it to the point where the largest pieces are smaller than a fingernail works well enough.

As you can see a fair bit of it has been reduced to powder. Besides eating this alone as a soup on trail, it also makes a great base for mixing in other ingredients. Dried veggies would give it some more texture and either freeze dried or pouched chicken would be a great add in for the meatatarians. I’m looking forward to enjoying some of this on my winter camping trips. Some hot soup warmed over the fire sounds like a great way to start a long winter’s night. Also pretty sure this stuff is going to come in handy on some of the longer trips I have planned for next year.

Now a question for those reading: Would you like to see more about my trail meal preparations? I’ve mentioned a few of my secret recipes in trip reports previously, but if there is interest I could share  some of those secrets.