44 pics and some babbling from an exploratory foray into New Hampshire’s Wild River Wilderness. Of course I’m not the sort to take the easy way that follows the river from the campground on a short trail with little elevation change. No, I started and ended my loop on Rt 113, hitting South and North Baldface on the way in before descending via the Eagle Link to the Wild River. 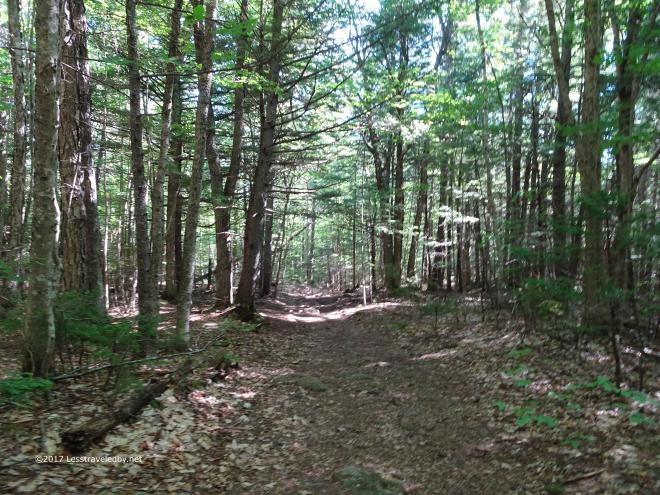 The first part of the trail was wide and flat. It was mid morning when I started out and already warming up so I covered this section as quickly as possible. 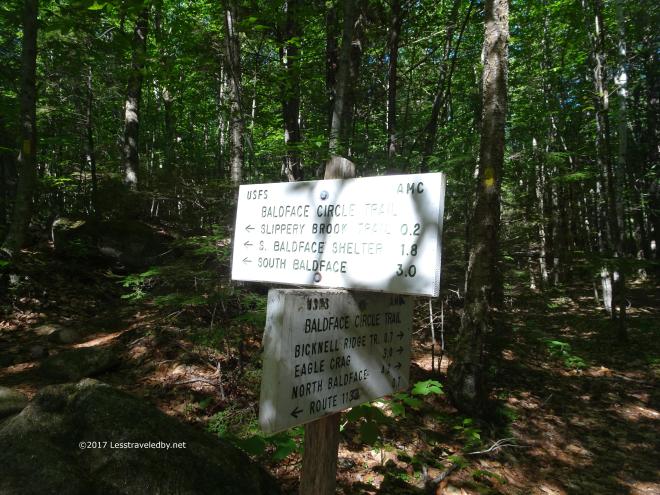 Then I arrived at the point where the trail split to create the bottom of the Baldface Circle Trail. I headed to the left intending on hitting both peaks early in the trip rather than tackling them on my way out on the last day. 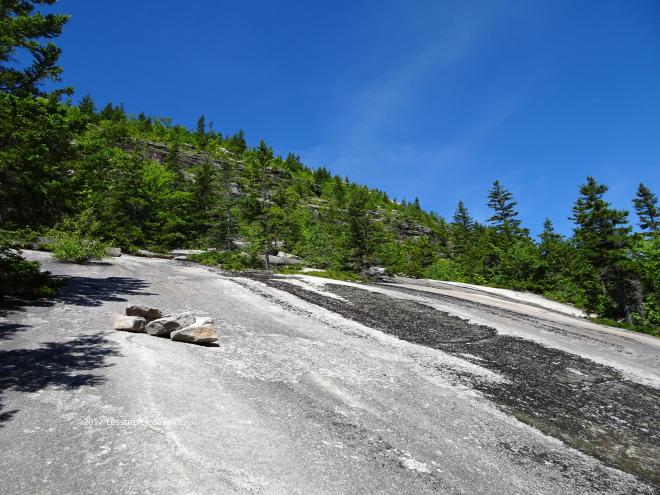 Once I got past the shelter campsite the trail ascended a series of slabs interrupted periodically by cliff faces of varying height.

Each slab was like a giant step up and the views began to really open up after I’d found my way up the first few. 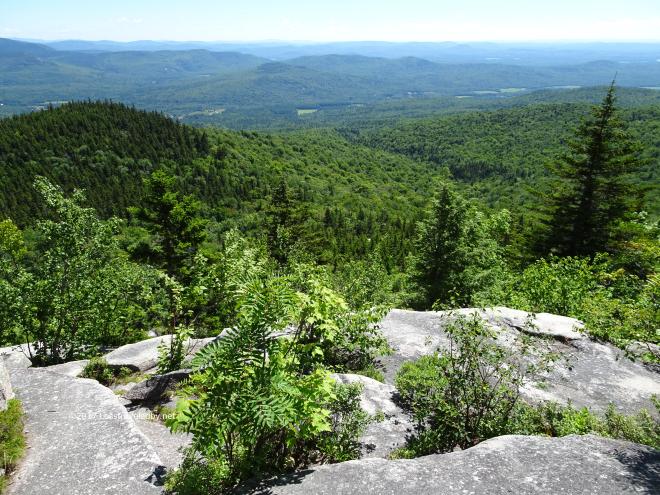 The shelter campsite was down there in the col before the knob on the left, but almost invisible from up here. I’d met a large group of kids with a couple of older leaders there doing a team policing of the site to pick up any trash before they moved on. 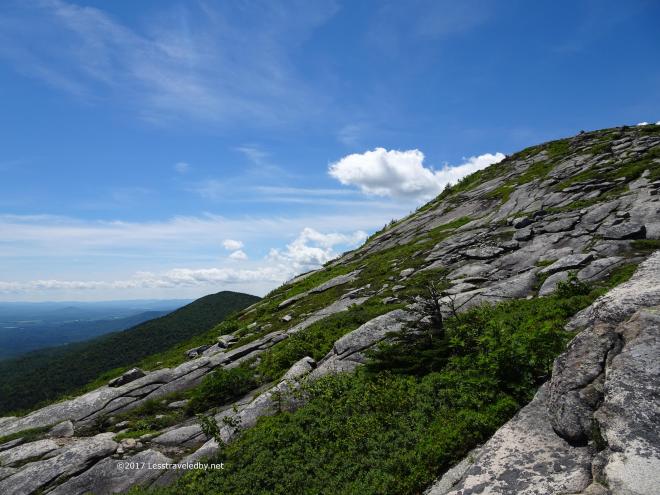 They were headed down, but I was still going up. This knob here wasn’t the actual summit, but the climb up to it was totally exposed. 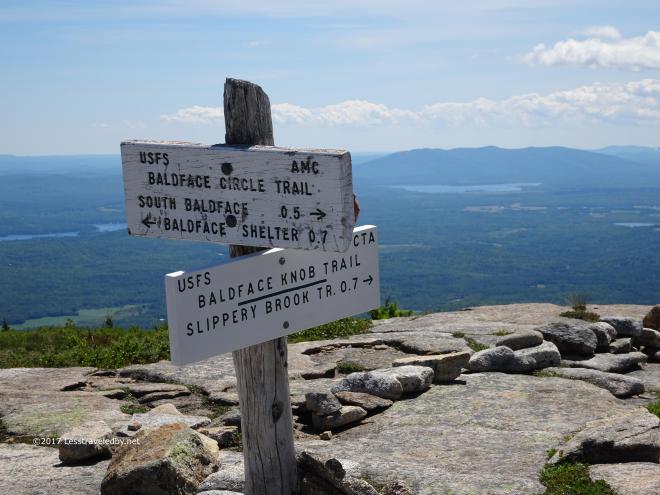 There I found the intersection with a trail that allows you to bypass the cliffy slabs I’d just finished with. Following the Slippery Brook Trail around leaves you with a short and steep hike up to this point without the challenges of the cliffs.

This youth group, not the ones I’d met earlier, was taking advantage of the easier way down. They were split into three or more groups and seemed to be quite a few in number. 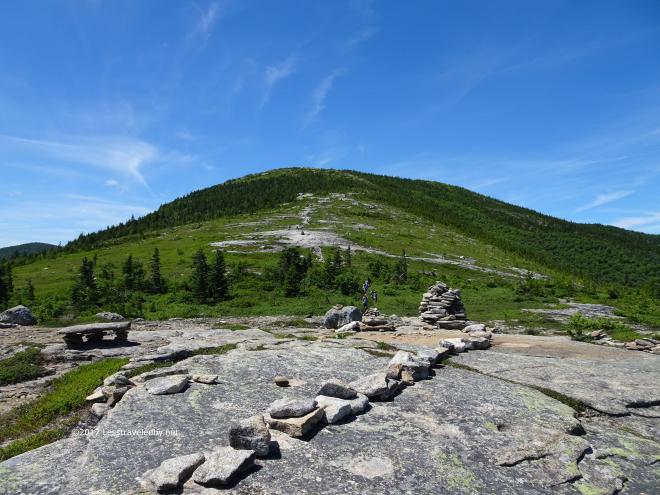 You can see another batch of them approaching and the actual South Baldface summit rising up beyond. This was a really fun area to hike with a lot of time above the trees.

Looking back at North Baldface nearing the end of my time on the ridge. Soon I’d be dropping down the back side via the Eagle Link Trail so I stopped here for a snack and to enjoy the views while I still had them. 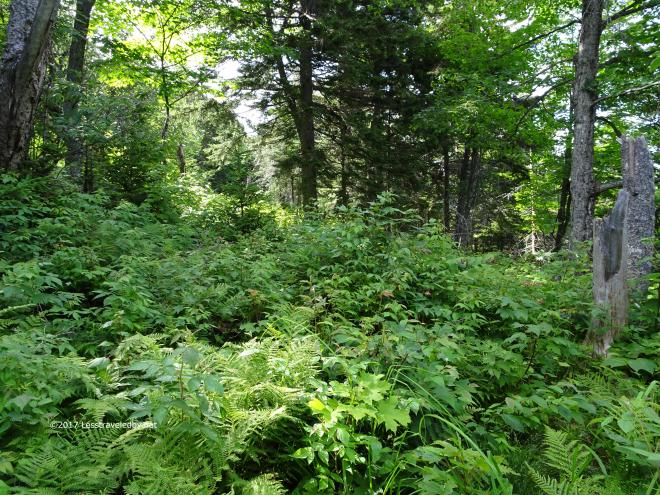 There was plenty of pretty things to see on the Eagle Link Trail, but seeing the trail itself was not a frequent occurrence. It appears that almost no one uses this trail and being in the Wild River Wilderness it is not maintained or blazed. There was a faint footpath under all of those leaves at least so I was pretty certain I was headed the right way most of the time.

When I finally reached the Wild River down below the trail become easier to see as it was more well used and open. 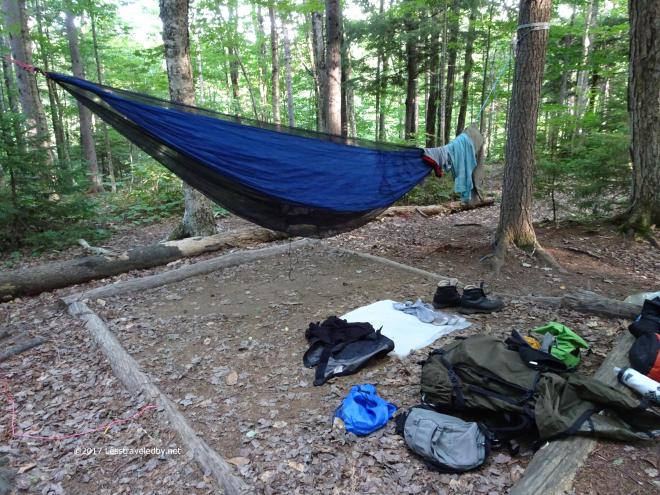 Not seeing better options along the Wild River Trail I made it all the way to the Spruce Brook tentsite. They have removed the privy but left the sites at least. I was surprised to find a family camped there and even more surprised when several groups of folks arrived after dark. Seems this spot is easily reached from the campground parking lot just a few miles down river. 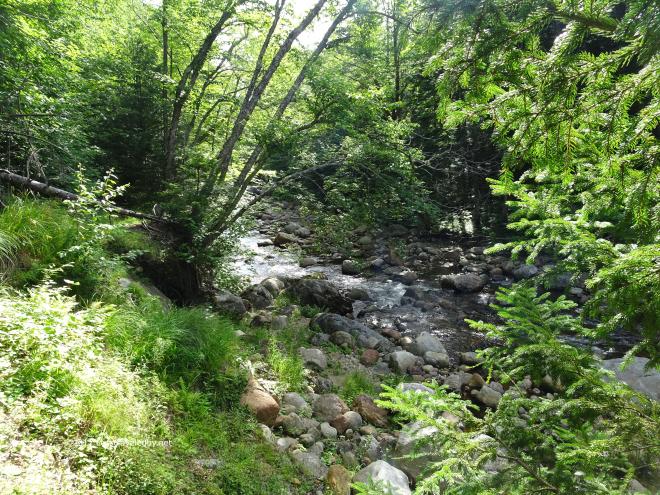 I moved out early the next day though I did not have far to go. I decided I’d just head the few miles up to Blue Brook tentsite and spend a, hopefully, quiet day there.

First I enjoyed a beautiful morning walking along the river. Sunshine on the greenery just made everything look bright and happy.

The sounds of the river bubbling along added to that sense of joy. Well and the fact that I knew I only had to hike a few miles that day didn’t hurt either.

There was some work to be done though as the trail ascended a bit after crossing the river.

Then it ascended some more! Still this was a nice soft trail with dirt under foot in many places so I wasn’t really complaining.

I was sweating a bit and happy to arrive at the Blue Brook site. Before even setting down my pack I started exploring the waterfall. 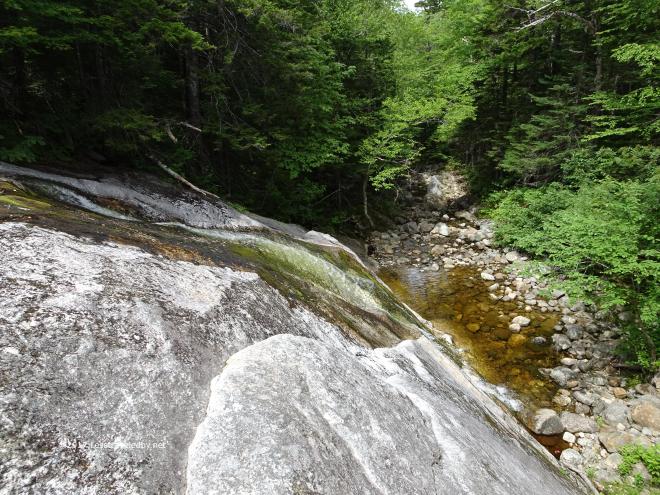 Following it across the rock face for a while i found that it went all the way down. I stopped myself from following and headed back up to fill my water bag. 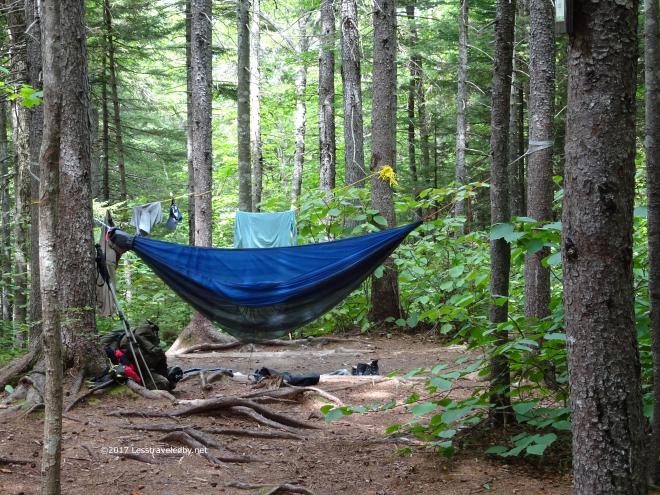 Then it was time to make myself at home! There was no one else there and while I heard a few voices on the trails nearby, no one else ever showed up that day or night. 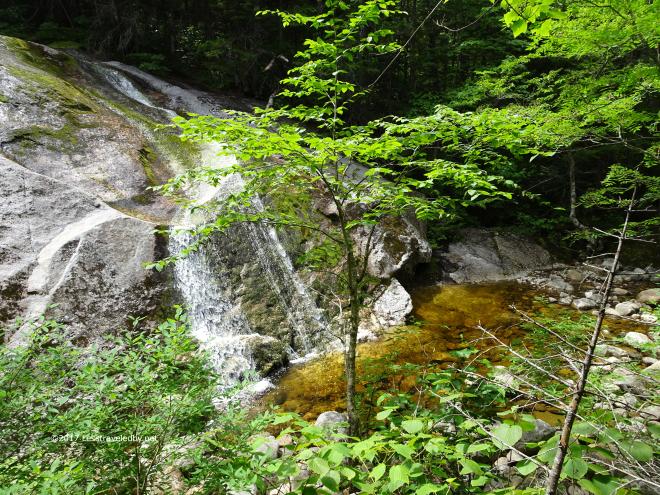 With all afternoon to relax and explore I managed to find a way to get closer to the bottom of the falls. This must be something to see early in the year when the water is really flowing.

This certainly was something to see! It was about head high and one of the biggest I have ever seen.

Rim Junction was aptly named and I spent a minute checking out all of the arrows to make sure I followed the right one to get me up on the Basin Rim headed towards  Mt Meader.

Even before the trees gave way there were hints at the beautiful views to come. I’d really gotten three beautiful days for this trip.

Of course there was still some more work to be done heh. I wasn’t excited about the climbs to come, but I was looking forward to being up on top of the ridge again.

Looking back wasn’t all bad either as the morning sun began to get a little higher. 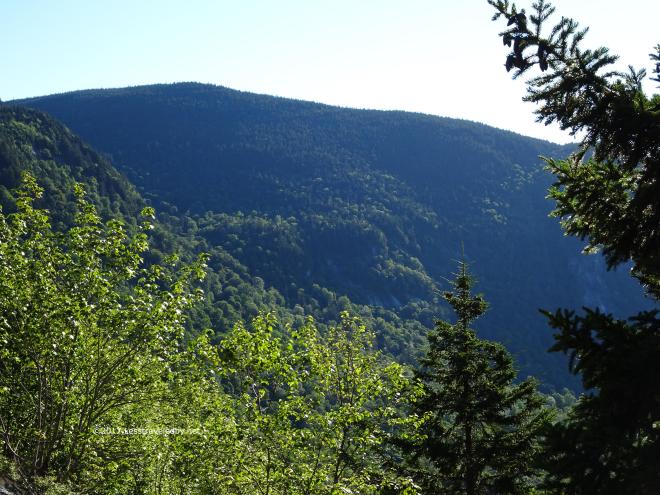 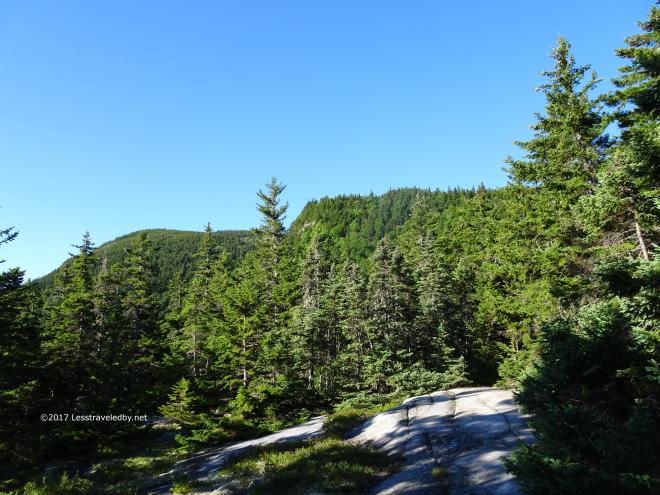 Then it was time for me to get higher.  There were a few relentless sections like this and even a surprising bit of water flowing out of the rocks at one point. 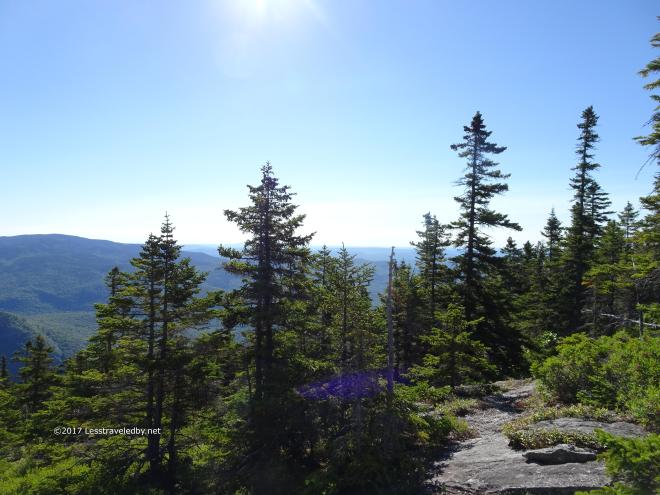 Then it began to open up more  and South Baldface came into view. Looking at it from here it was hard to imagine I’d climbed up that ridge with a three day pack on my shoulders. 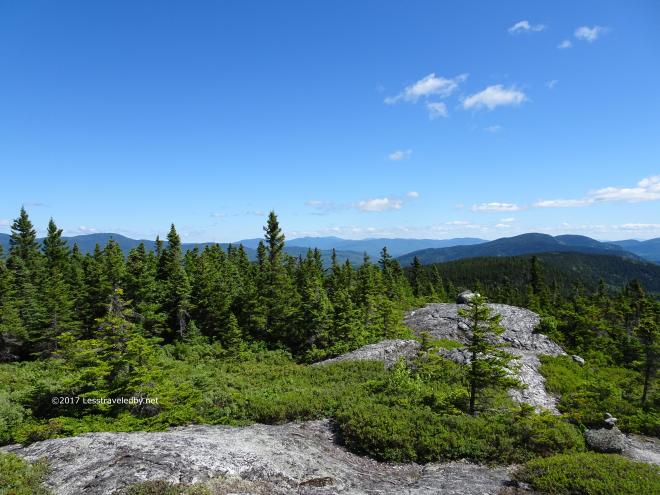 Now I was up on the ridge and feeling light footed with my food bag empty and a nice breeze blowing.

I found this couple set up in a nice spot working on some plein air art. We chatted for a bit about what a great place it was to spend some time before I left them in peace. 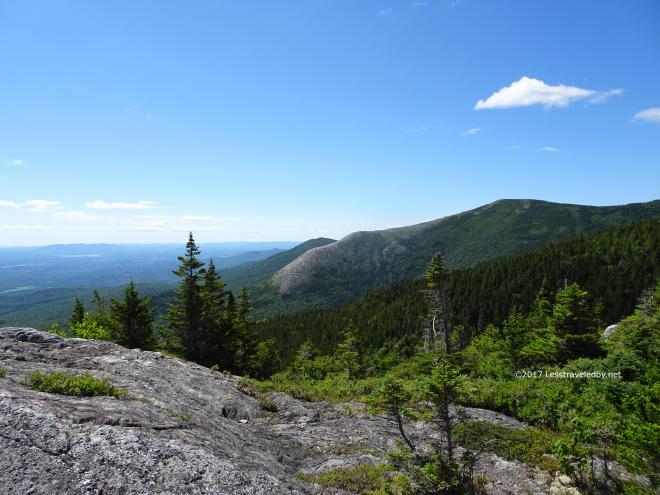 Then it was time for me to descend. Light pack or no this was a good time to go slow and try not to break my neck. 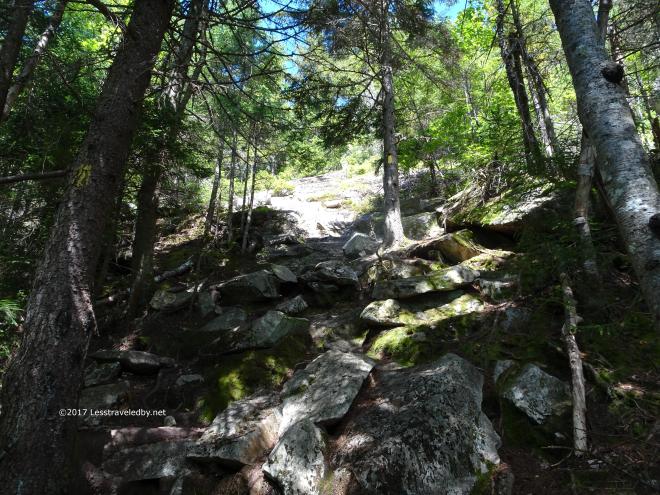 I knew that search and rescue crews rarely carry cheeseburgers so it was vital that I get down in one piece. There were a few tricky bits, but I think this side was easier to go down than the other side would have been. 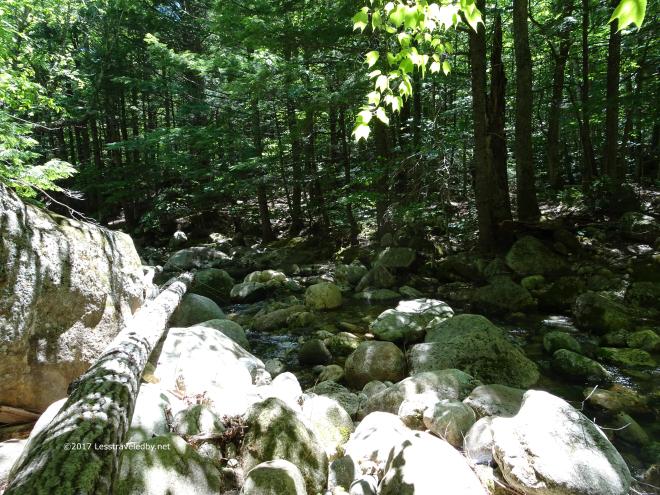 I wasn’t too far from the parking lot at this point, but decided to stop to refill my water bottles and eat some cheese just because it was too nice of a day to rush out of the woods. I’d begun to see more and more people as it was summer Sunday so everyone was out for a walk. These last few minutes of peace were wonderful. 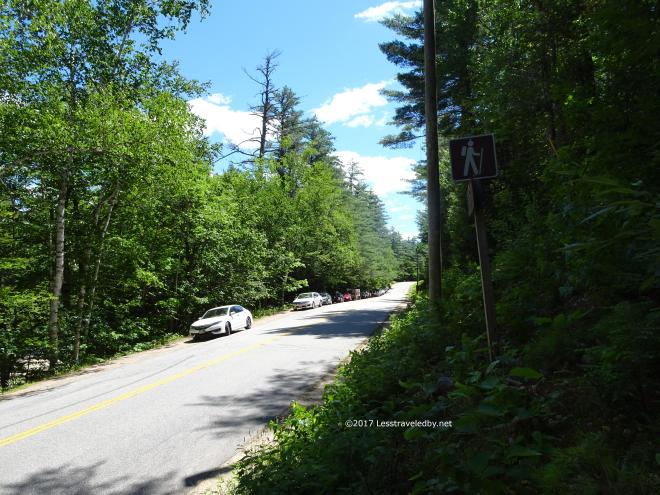 Back at the road there were cars parked for a long ways along Rt 113 outside the full parking lot. I’d say I saw at least 20 people milling about the area and made a point of loading up quick to be on my way. Even managed to get back to Fryeburg before running out of gas. Definitely a great trip all around and a lot of fun to explore some place new!